Team Honda Racing’s longtime title leader Troy Herfoss and Yamaha Racing Team with Yamaha Motorcycle Insurance’s defending champion Wayne Maxwell will enter this weekend’s final round of the 2015 Swann Insurance Australasian Superbike Championship tied for the points lead. The battle for the number one plate will be between them and Maxwell’s teammate Glenn Allerton (24 points in arrears) come Saturday evening, aired on Fox Sports nationally. CycleOnline.com.au spoke to the pair about their chances earlier today. 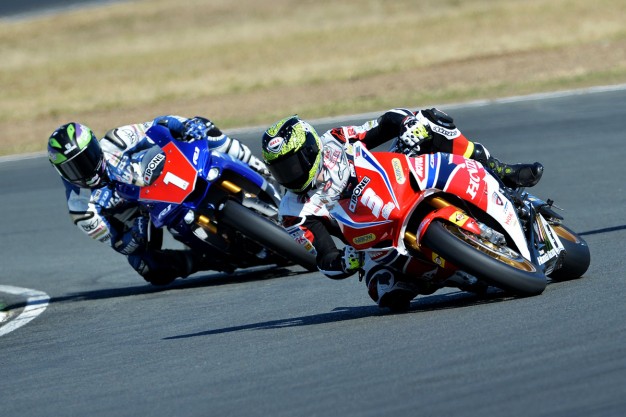 How are you feeling about your championship chances entering this weekend’s title decider at Sydney Motorsport Park?

Herfoss: It’s an interesting one really, because I’ve led the championship from the first round and now Wayne’s had his good rounds. We’ve pretty much gone back and forth round for round. I sort of dominated at Wakefield and he returned serve at Winton. That round hurt me because I knew I’d be strong there, but in reality he was a little bit stronger. Going into Sydney equal on points I feel like he’s in good form, so it’s going to be really tough – I’ve just got to hope that we are as strong as we have been in the past there and that a bit of luck goes my way.

Maxwell: I’m fairly positive going into the weekend. We haven’t tested or anything since the last round at Winton, so basically all I can take is my form from there. We’ve had mixed results in the previous two rounds at Sydney Motorsport Park this year – the last time we were there we were able to beat Troy, while the time before he beat us convincingly. So lets hope that we’re competitive and that we can come out on top on the day.

What are your strengths entering the third Sydney stop of the year for the final round?

Herfoss: Well, last year and then this year being there twice, I feel like my strong point is that I can pass almost at any turn on the track really. Both times we’ve been there this year I feel like we’ve had the best bike around the back of the track, so if we are in a fight with another rider then for sure I can pass anywhere. As long as we can get up to speed early, which we usually can, then the format should suit me. In the first sessions of the day there’s only been a couple of us at the front, Wayne being one of them, so if we can get some good speed together and get away from the pack a little bit, it’d be good to fight it out with Wayne.

Maxwell: I think we’ve got the bike a lot more consistent now. We’ve been fast over one lap since the start of the year, but at Winton the positive was to do the fastest lap on the last lap in two out of the three races on the Sunday. It means my fitness is good, the bike’s handling the tyres good and hopefully we can get it all to come together on Saturday night there in the twilight.

The friction increased at Winton, as we saw on the coverage, so what was said and how’s the relationship between you now?

Herfoss: There was definitely some friction, but mainly just two people wanting to win – one doing the winning and the other one not really [laughs]. You know, I wanted to win so bad and I was so close, so yeah, in the heat of the moment a few things were said that I took the wrong way, he took the wrong way, and it was really nothing too bad. Anyway, it is what it is, and it’s funny with Wayne because I’ve known him a long time. We seem to be able to have a disagreement or something and then we’re fine. It’s just a matter of two people who really want to win and that’s it. Nothing personal.

Maxwell: Yeah, look, Troy is a competitive sort of a guy and I think he was just frustrated that obviously we had the Yamaha working really well and he tried a lot of things to overcome that with a few different strategies. He couldn’t and I think the frustrations got the better of him. After he cooled down we had a good chat and we’ve spoken several times since, so it’s just a shame there has to be only one winner when you’re racing such a good mate.

Finally, your thoughts on the championship going down to the wire live on Fox Sports in a unique Saturday afternoon/evening format?

Herfoss: The different format, honestly speaking, I don’t agree – I don’t think it’s fair to introduce a new format a month or two out from the last round. Friday will probably work in my favour because it’s one race, so I’m leading the championship and the less races the better at this point, but in reality I don’t think it’s the right way to do it. On the other hand, I do understand Terry [O’Neill] is trying to bring the sport up, he has live TV and does have to make some changes to run that. At least for the main championship it’s hopefully going to run full and smoothly, plus that it looks as good on TV as it has been because the racing has been really close.

Maxwell: It’s good to have live TV on Fox Sports, channel 501, between 5:00pm to 8:00pm and we’ve got two races in that three-hour time frame. It’s great for the sport, the weather looks good out there, so hopefully we even get a decent crowd. It will be perfect conditions for the twilight meeting and a great innovation from the guys at the Australasian Superbike Championship. Lets hope that we can put on a good show.