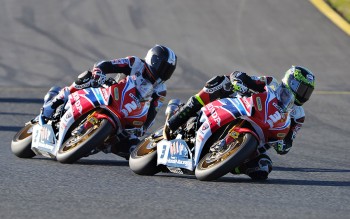 Team Honda Racing is poised for one final Superbike challenge! The finale of the Australasian Superbike Championship will be held this weekend at Sydney Motorsport Park and #3 Troy Herfoss sits on equal points at the top of the leader board heading into the event.

Leading on 316 points, both Herfoss and Maxwell are gearing up for a battle royale to take the Superbike title in what is certain to be a thrilling conclusion to an action packed season for Team Honda Racing.

#2 Jamie Stauffer is in 6th place on the leader board to begin the finale and is looking to finish a strong season on a high, saying “I am out of contention for the title of course after missing round 1, but I have had a great season since my recovery and I am looking forward to this weekend’s finale immensely.

he twilight racing should make for some interesting viewing for spectators and will be something different for competitors that’s for sure. I have experienced twilight and night racing in Japan for the Suzuka 8 hr event as has Troy so to do it here for a domestic race will be great.”

Title contender Troy Herfoss is not concerned about the introduction of the new format at the finale, saying “I think it will make the event all the more accessible and exciting for the spectators so that’s great. I’ve raced in the twilight and also done night racing over at Suzuka so I know what to expect although it is slightly different doing sprint races in the twilight as opposed to endurance races, but the point is I am there to give it my all and take home the 2015 Australasian Superbike Championship title for Team Honda Racing. I am really looking forward to getting out there as it is going to be a huge weekend.”

Fox Sports channel 501 will have racing at Sydney Motorsport Park live from 5pm – 8pm on Friday 4th and Saturday 5th December and live streaming of all Saturday’s races can be viewed at www.teamhondaracing.com.au/live-stream.html so you don’t have to miss a moment of the 2015 ASC finale.