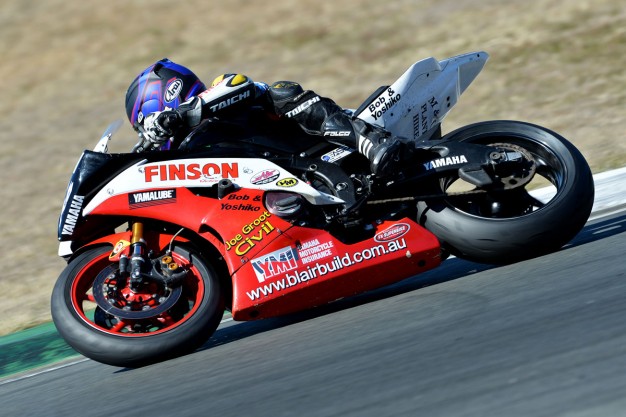 I would have to say going unbeaten during this year’s Phillip Island Supersport Championship, at the World Superbike and MotoGP support events. To do it in front of such a large crowd, supporters and the international teams was a huge thing.

This year at Wakefield Park on the Saturday in all of the mixed conditions. I had two crashes in qualifying, but still managed to qualify on the front row.

Long-term goal would be to get a ride on one of the factory teams here in Australia, then hopefully overseas – riding anything, anywhere. If it’s a motorcycle, I’ll race it!

Phillip Island. Just because it’s so fast and following. You can make up or lose so much time through one corner if you hold it flat out or roll off the throttle. It’s simply an unreal track to race a motorcycle!

I don’t really have an arch rival. I’m out there to race the track and the times. Everyone can win if they are hungry enough.

Well I’m already in the family business (Blair Build), so I weren’t racing I would still be a builder.

Probably Mick Doohan. Just with what he went through with his leg in 1992 after almost losing it and he came back to win five straight world 500cc titles. That was amazing what he did. Without a doubt he would have to be Australia’s best ever motorcycle racer.

Not really. I always put my left glove on first, but that is not being superstitious, it’s just force of habit.

I do a lot of training with Karl McCafferty from MV8 personal training. I do a lot of boxing, running and I also do a lot of pushbike riding. I try and mix it up a bit by doing about 20km on the pushbike and run about 10km throughout the week. I also do a bit of strength training.

As I live close to the coast, I do enjoy my surfing and fishing quite a bit. I don’t mind a bit of skiing as well.

Currently have a Ford Ranger.

The Australasian Superbike Championship paddock is made up of some cool people. Everyone is pretty friendly. It’s also pretty good having the support from Yamaha with the YRD program. Yamaha and YRD sure do support road racing in this county and do a great job at it as well. They seem to do a lot more than some other countries.

Who will win next year’s WorldSBK?

I got nothing. No hidden secrets at all I’m sorry.

Tearing my ACL and breaking my leg while dirt track racing in 2010 at the New South Wales Championship. I just clipped the back of another rider and flying over him. I put my leg out straight and it just compressed.

I’ve never been in a fight.

Phillip Island, 2014 at the World Superbike support event. I just tucked the front end at turn three as it was really windy and a bit damp. It put me out for six months.

I don’t drink energy drinks, but if I had to choose it would be Red Bull.

PC. I had a Mac once and it broke!

MotoGP. It’s the pinnacle of our sport.

Print. Just because I don’t have a laptop or iPad and my phone is to small.