Off-track with the Australian Supersport front-runner. 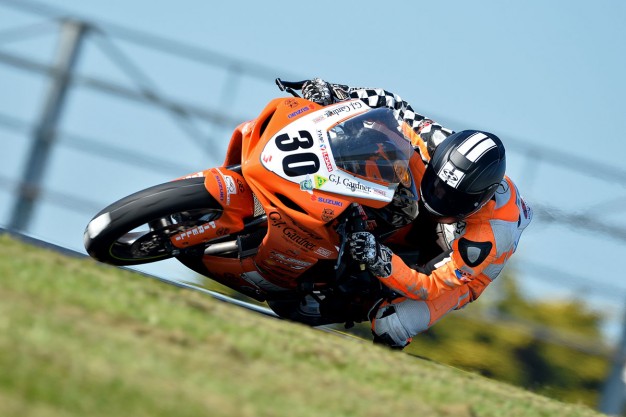 It would have to be winning the Australian Under 19s dirt track championship and became the youngest rider to do it in 2012.

That’s a good one. It would have to be against Callum Spriggs and Chris Quinn at the Queensland Road Race Championships in 2014. It was a 12-lap race and by the end of it we were all covered by 0.3 of a second at Morgan Park, which is nothing. It was just so close!

It’s getting closer… I want to win a World Supersport Championship!

Morgan Park, purely because I have the lap record there from August last year.

Everyone who I race against. I don’t really have an arch-rival as such. Whoever I’m racing against is an arch-rival really. I don’t like getting beaten!

A builder. I’m a qualified carpenter, so I would keep going on with that and try and make a living.

Greatest inspiration for me would have to be Casey Stoner. He was a dirt tracker and he was the pioneer of drifting road bikes really. Everyone loves his slides!

Not really. Whatever happens, happens really.

I train pretty much every day of the week. I cycle, run, go to the gym. I also live on the beach, so I try and do most of my stuff around the beach. I pretty much started training when Brayden Elliott flogged me in Queensland last year.

I’m a commercial fisherman and builder, so I do that. As I said, I live around the beach, so I enjoy doing a bit of surfing and live the beach lifestyle.

Modern rock! Can’t get enough of it.

I have a close group of people who I work with at the track that I enjoy. I have my father Trevor, Dave Fuller and Tony Hatton. Tony is a big one for me. Ryan Taylor also helps out as well and makes things a bit more of a giggle out on track.

I’m basically just a quiet coastal kid. I’m not always as crazy and aggressive as I am on the bike.

I got a PW80 when I was six years old from good old Santa!

I fractured my ankle at Mac Park in South Australia. It was my first road race in 2011 at the Easter Cup. I had a highside and it just ended up in s**t creek!

I’m a clam person, I don’t fight. I wait till I get on the track to fight [laughs].

My last holiday was today because I didn’t have to go to work.

It would have to be 2014 at Phillip Island, while leading race one in the Australian Supersport Championship. I crashed out at Lukey Heights in the rain!

McDonalds. It looks healthier when you get it, I don’t know if it is, but it does have less oil.

World Supers. There are better crashes… I just like the look of the heavier bikes and they are street related bikes which I like that side of it.

I would like to say print, but I read them all digital now days, so will have to say digital.

This is tough and this will get me into trouble – we’ll go brunette. They just look hotter.