Italian veteran confirmed on official factory team for next season. 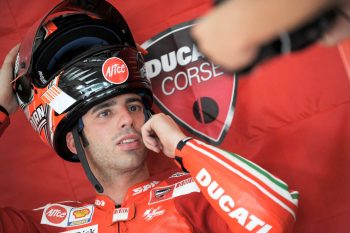 Melandri, 33, will return to racing next season in WorldSBK, where he has claimed 19 wins and 49 overall podiums in 100 races. He last raced fulltime with Aprilia in MotoGP last year before exiting mid-season.

“I’m really excited to come back to racing, it’s a dream come true,” Melandri stated. “I always said I was only interested in a top bike and top team and I could not have asked for more. I kept following WorldSBK closely and I’m confident the Panigale R can perfectly suit my riding style.

“We’ll just have to take one step at a time, but the potential is surely high. I know it won’t be easy to get back up to speed, but I have all the time to step on the bike, do laps and make sure I’m ready for the first test. To this end, I will skip the holidays to train on a street version of the Panigale R.”

Luigi Dall’Igna, Ducati Corse general manager, commented: “Chaz Davies has become a key member of the Ducati family, so we’re happy to announce that he will ride with us for two more years. Chaz has shown great progress and we’re confident he can take our bike to even higher grounds. In 2017, he will ride alongside Marco Melandri, who took upon the challenge with great enthusiasm.

“Marco is a talented rider, he has already achieved prestigious results in WorldSBK and we’re confident that the year spent without racing has not undermined his qualities. We’re obviously sad for Davide Giugliano, who will part ways with us at the end of the year and we wish him nothing but the best.”

Davies, 29, meanwhile has committed to the Italian factory for a further two seasons through 2017 and 2018 – in the frame for a MotoGP transfer in the second year of this deal. The 29-year-old has taken nine wins and 32 podiums to date on the Panigale R and will be a title threat into the next season.

“I’m extremely happy to renew my professional relationship with Ducati for two more seasons,” Davies said. “The continuity element is really important in our job and so far we’ve made great strides and got progressively closer to our goal.

“Now we can fight for the win practically on every track and I’m confident we can make further improvements. Moreover, to race for Ducati is something special, everything is done with heart and passion, you really feel part of a family and have a direct connection between the production and racing. It’s going to be exciting.”

The future of hard-charging Italian Giugliano remains uncertain following his Ducati exit, unable to win a race in three seasons as a rider on the official team. He’s been linked to Moto2 and WorldSBK seats during the silly season.