Falzon and Coote reflect upon their winning weekends at the opener.

A pair of surprise winners stood atop the podium at Phillip Island’s opening round of Yamaha Motor Finance Australian Superbike Championship (ASBK) presented by Motul Pirelli, in Daniel Falzon (JD Racing Caterpillar Yamaha) and Mason Coote (Mason Coote Racing Yamaha). Both have interesting stories to tell and we were fortunate enough to track them down post-race on Sunday afternoon. 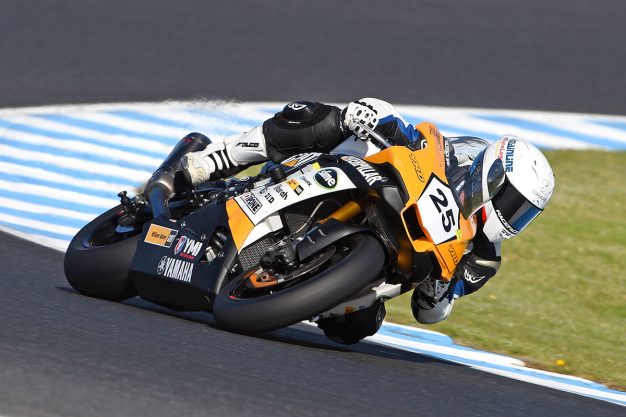 Congratulations. It was a perfect start to the season with pole position, three wins, the overall and the points lead… it couldn’t get any better!

Exactly right, it couldn’t get any better. The Caterpillar Yamaha has been working flawlessly over the weekend and the team as well. There were no faults throughout the weekend and we made the best decisions during the off-season, we did some R&D and the bike is absolutely perfect – there’s no complaints from me. I’m really excited to go out and continue this season. We’ve started out with a bang, 76 points is a big start in the championship, considering we only got marginally more than that last year in the whole season. I’m really excited for what the future has in store because we have a really competitive package this year.

There was a lot of hype going into the season, a lot of good guys, a lot of factory teams and also really strong support-type teams as well, but you didn’t expect to have this result at the end of round one, did you?

I didn’t put myself up there to be a round winner. I knew we would be mixing it up with the factories here and there, but that’s pretty much it. I’m absolutely speechless, to be faster than the factory teams on our privateer team is a credit to everyone involved. We’ve got quite a big supporter base and my social media has been going crazy since this weekend started because I don’t think anyone expected it, so I look forward to Wakefield Park.

Did you know the situation in the final race in terms of combined times?

Yeah, I was doing the calculations the whole time! I knew when Wayne [Maxwell] passed me I had a 1.6-second, or something like that, buffer over him and Glenn [Allerton] also wasn’t quite up there like Robbie [Bugden] and Bryan [Staring] were. So I just knew I had to stay behind them and in the last few corners I was close enough and didn’t bother making any stupid mistakes. I just stayed on the bike to collect first position.

You’re a multiple national champion on the 600 in Superstock and Supersport, but what’s it like to be leading the Superbike championship and how does that change your game plan heading into Wakefield?

It changes it a lot. I’ve quit my day job now – I haven’t told work yet, but I’ve just decided that I will [laughs]! So I’m putting everything into this year, it’s going to be everything we’ve got and this round was just a taste of it. So yeah, I’m excited and 76 points gives us a great buffer going into the next round, which is going to be difficult for us on the Yamahas. Never the less, it’s a long championship and we’ll go to some tracks that will really favour us and hopefully we’ll get another clean-sweep.

We did the news article on your tyres, but this weekend it was Pirelli and you might not know what you’re on next weekend… have Pirelli come over and tried to get you on [full-time]? 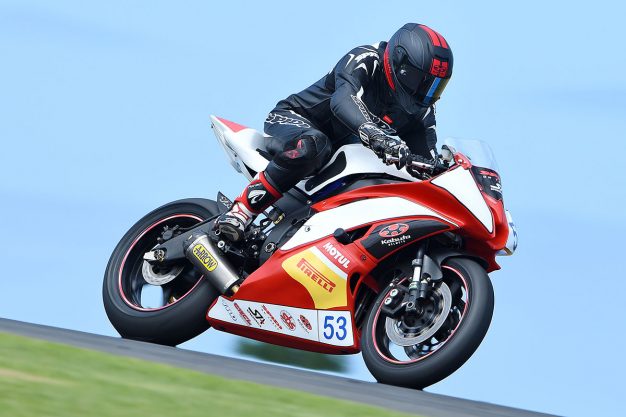 Opening round win and over a year out of the sport, so you must be really pleased to get this result and a bit surprised as well?

Yeah, I can’t even explain how surprised I am to have 14-15 months out of the sport – it’s unreal. I did do a little bit of sneaky testing over the December month and we got to the ASBK test and we were pretty competitive there, but I didn’t think I’d have the race-pace to be mixing it at the front, take two wins and a second, and qualify second on the grid. To come out leading the points at the end of the weekend, it’s unreal. I’ve never been up here on the podium before, so I’ll savour the moment and hopefully we can get back up here shortly.

When you got into the front in the first race, it looked like you remained pretty composed, but you must have been nervous! You didn’t really show it.

Well I hadn’t been in the situation before and I treated it a lot like a qualifying session, so it was a matter of keeping my head down and not losing concentration. I was having a bit of a look at the big-screen coming into turn 10, keeping track of the guys behind me and I thought they would be coming, but they just didn’t. Between the big-screen and the lap-board I was able to just keep edging away and I was able to come across the line, I think. 3.7 seconds in front of second place. It was unreal, the guys in the pits did an amazing job and again, I just can’t believe it. The battle with Mark [Chiodo] in the third race for the win, we were both making plenty of mistakes, but who made the least mistakes came out on top and fortunately that was me.

He started out the round really fast and then he made that mistake in race one. At the same time you improved and he came back in pace a bit, but in that final one you ended up winning and it must have been really special in itself, to beat him straight up…

The first race was sort of bitter-sweet. It’s always nice to get a win, but with Mark going down it took a little bit of the edge off. To fight tooth and nail to the final corner and come out on top in race three, it was unreal. I’m not sure how Mark was feeling after his little mistake in race one, he might have lost a little bit of confidence, but for me it put me on another level and I was able to keep pushing away at the front. To be fighting with someone like Mark around here, for me, it’s just unreal and I can’t believe it.

What’s your attack heading into the next rounds? It’s a seven-round series so there’s obviously a long way to go, but what’s the plan?

Coming into this round there was no plan to even go to round two! I didn’t even think I’d be in the points-hunt. Financially it’s impossible for me to do it by myself, I’ve got a good bunch of guys around me and I don’t expect them to, but I hope that they can help me make it to round two and that I can be right up front. But at this stage it was just going to be the local rounds in Victoria and maybe Sydney, but from here it’s probably a bit of pressure to make it to all of the rounds now and keep plugging away.