Herfoss and Toparis on their hometown round victories.

Goulburn fans were delighted on Sunday afternoon with the home victories of Troy Herfoss (Crankt Protein Honda Racing) and Tom Toparis (Cube Racing) in the Superbike and Supersport ranks at Wakefield Park’s 2017 Yamaha Motor Finance Australian Superbike Championship (ASBK) presented by Motul Pirelli round. CycleOnline.com.au tracked them down following the weekend to get their take on what was an eventful weekend. 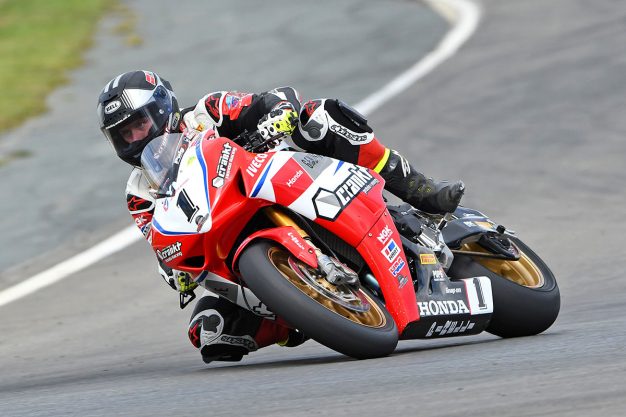 It was a pretty eventful weekend here at Wakefield and you obviously made a good decision in that first race and then the second race ended up with all sorts of things happening, so how was it for you?

It was really tough. This track’s a strong one for me and we had all conditions thrown at us – wet, dry or in between – so I’m really happy that we were fastest in both conditions and stayed off the ground for pole position, a race win and round win. That enabled us to catch a lot of points back, so I couldn’t be happier. It was almost a perfect weekend! The best part is that we’re really strong, if not a little bit stronger than everybody else at the moment, so we move to Winton feeling good.

What was going through your mind in the second race, on the slick tyres and starting from the back? You stormed your way through really quickly!

I didn’t know what the other guys had chosen, whether they’d gone out on slicks from the start and it was sort of weird, because I was a lot faster than everyone at the start at I got to the lead really quickly. I was worried about rain, so that’s why I put my head down and got a pretty massive gap, then once I knew I was a long way ahead I obviously went into caution mode and brought it home. It was one of those races where it turned out really easy, but the decision was really stressful.

And in the second race, what happened off the start? Just didn’t get it off the line?

I don’t think I was positive enough with the selection of the gear. It told me I was in first gear and then I looked up at the lights, went to go and I wasn’t in first gear. I must’ve got a half neutral or something, but anyway I quickly put it down a gear, went into second and it was hard to get off the line [laughs]. I just made a complete mess of it, but anyway, if it hadn’t of been a red flag we would’ve had the race won with four laps to go. That’s the way it is – Wayne got the win and he didn’t make any mistakes. I did, so that’s okay, we got the lead down to six or seven points to [Daniel] Falzon and that’s really good.

This weekend in terms of your performance, it just looked like you could put the bike basically anywhere you wanted it and no matter the conditions, you were quick. Is there something about this particular track that suits your current bike?

No, I just think that we don’t have a disadvantage with power here, we’ve got a bike that we know really well and I think that I’m at a high level as well. It’s all working really well for us at the moment. Things could change when we get the new bike – we don’t know – so in one regard we’re lucky we’ve been with the same bike and team for a long time, but we’re definitely excited for the new bike to arrive.

Alright well no worries, thanks a lot and well done!

Yep, no worries, thanks Alex. 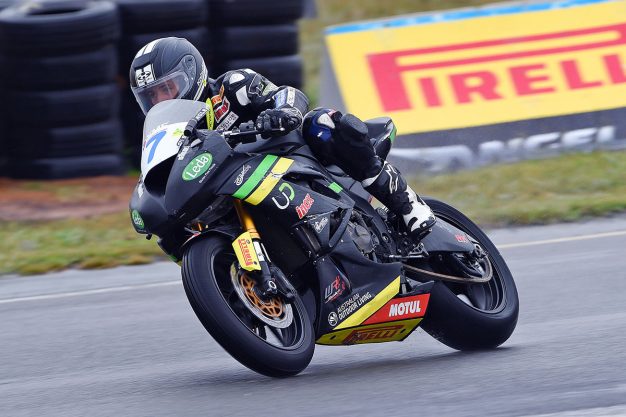 Well done Tom, it was obviously a really good result at home and so soon on the Supersport bike, so just tell us about it…

It was definitely a good weekend, my second round on the Supersport bike and I felt like I did a good job considering the last round, so we finished pretty well in the end. There were a lot of different conditions this weekend, but we got it right in qualifying two on Saturday with a good strategy – we were in the box for half the session almost – and managed to get pole. That set us up well for the races.

That first race, in the wet, was a cracking one when you withstood the late pressure of [Giuseppe] Scarcella after leading pretty much the entire distance.

I didn’t really think I was going to win in the wet this morning, but I got the job done. On lap one I was third, people were going down everywhere, but I dropped the hammer and broke away to about an eight-second lead. From there I was a bit conservative, by the sounds of what everyone said he just reeled me in and got passed on the last lap, but I fought back at the top of the hill and led the rest of the race. That was a really cool feeling to win my first Supersport race at home.

And the challenges of race two were difficult to overcome on their own. What happened there?

In race two it was mixed weather conditions again and I led for a while, but I saw rain drops on my visor and some guys went past. I ended up back in the lead and pitted to get my wet bike, but as I was leaving, they called a red flag. They said I had to start from the back of the grid, which was frustrating because I didn’t feel I should have been and I could have been able to battle for the win if I was further up the grid. Anyway, I rode as fast as I could, dealt with what I had and came home fourth in sketchy conditions.

It must have been a good feeling to reward the team and your supporters, to get the overall after all of that?

That gave me the overall, which I was happy about, but I was disappointed with some things, that’s for sure. It’s really rewarding for myself and the Cube Racing team though – I’m glad I could get this result so early in the season and I feel like we are in it for the championship now.