Riders and industry personnel on the controversial Falzon and Buckley incident.

Darwin’s fourth round of the 2017 Yamaha Motor Finance Australian Superbike Championship presented by Motul Pirelli proved to be one of the most dramatic of the season thus far, with JD Racing Yamaha’s Daniel Falzon initially being disqualified from his sixth place result in race one after coming together with Kawasaki BCperformance’s Kyle Buckley, ultimately causing a red flag. Falzon appealed the decision, which was overturned this week, causing mixed opinions across the industry. CycleOnline.com.au got in touch with a selection of the riders and industry personnel for today’s edition of The Point. 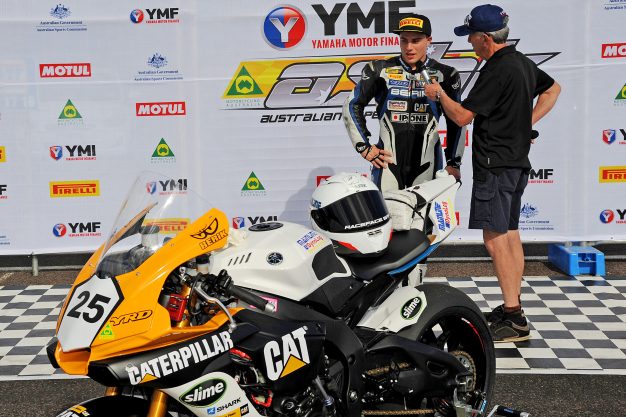 Daniel Falzon (JD Racing Yamaha):
Honestly, I think that the incident was an unfortunate event for both of us. I never want to see a friend or a fellow rider injured, however in regards to the version of events leading to the incident, Kyle and I seem to have a differing opinion. I never believed I was the sole cause of the red flag and was shocked and upset to hear that I was protested after the race restart, of which I was permitted to participate in. I believe that I had passed Kyle in to turn five successfully and was trail-braking to ensure I had slowed sufficiently for the turn. However, I was then hit from the side – the front of Kyle’s bike made contact with my left boot – causing me to lose the front-end and low-side, consequently taking Kyle with me. Had there not been any contact, I would have successfully passed him – it doesn’t take much of a bump to lose front grip when trail-braking into a corner. I truly believe this is an unfortunate racing incident. If you race motorbikes at any level and expect incidents to not happen, then this is not the sport for you. I have been racing nationally for 10 years now and have never taken another rider out of a race, nor have we ever lodged an official protest against someone else, so this protest did come as a surprise to me, yet I can understand the ulterior motifs behind teams’ decisions to want to have the championship leader stripped of points. I have a target on my back and me losing points benefits every one of my competitors. People will side with who they like, yet the decision was given to the racing steward and associated decision makers, so it was out of my hands. I am sorry for Kyle being injured in the incident, I wish him a speedy recovery as he’s the last person I would want this to happen to, but I won’t take the penalty unjustified. I was initially told by the officials that the protest made by a team stated that I had simply low-sided on corner entry, prior to making contact with Kyle, which resulted in me taking him out of the race. I knew this wasn’t the case though, I was completely in control of my motorbike until I was hit in the side. I think that the photo of the incident, which I assume everyone has seen, was rather damning and it’s easy to assume that I was in the wrong. However, it doesn’t paint a clear picture as to what happened to cause the crash, only the aftermath. It was this image which initially caused me to be disqualified, yet all the contributing factors had not been considered. The footage on the rear of my bike confirmed my claim that I had not fallen prior to making contact with Kyle, it was a result of the hit and I was in fact half a bike length ahead before contact was initially made. This disqualification had the ability to entirely change the championship for me. As I previously stated, I can now understand why I was protested when you consider the vested interests of teams and their other riders’ benefits from my loss of points. The ASBK championship this year has been very exciting, with close and unpredictable racing. We have had four different winners in four rounds and the title fight is very close, in fact we are equal on points with Troy for the lead. We have had a few rough rounds recently, I don’t feel we have been able to put enough points on the board for what we’re capable of, so these 15 points are vital to ensure we can maintain our battle for the title this season. I’d also like to state that regardless of the outcome from this protest, I’m very impressed with the professionalism that MA showed. They were very thorough in their investigation and considered all evidence prior to making an informed decision.

Kyle Buckley (Kawasaki BCperformance):
My experience is that I tipped into the turn five, as I did every lap before. The first sign of any problem was when I felt a bike smash into the side of me and I went down. The rest is clear. After seeing all of what’s happened over the last 24 hours, I’m confused what the ruling a: causing the incident and b: being involved in the incident, constitutes? My focus now is on my broken leg and trying to come back as soon as I can, as strong as I can.

Troy Herfoss (Crankt Protein Honda Racing):
It’s a difficult situation and a tough one to call, in my opinion – I read today that Kyle and his team weren’t involved in the decision, or didn’t have say – it seems strange to me. If he’s (Falzon) been reinstated, that means he wasn’t involved in the incident – if you’re involved in the incident, then you can’t restart the race, which means it was Kyle’s fault, basically. I guess that’s how I read it, the rules are going to be read many different ways, something just doesn’t seem right about the situation. But, until we see footage and reports from both parties, I can’t really make a decision on what I think of it. It definitely affects my championship, and yeah, it’s a tough one – it hasn’t been handled so well if you ask me. The rule is clear as day, it states: If you caused or contributed to the event being stopped, you may not participate. The rule is quite clear really, it’s rule 10.12.13.4B. Him being cleared means he didn’t cause or contribute to Kyle crashing, so Kyle caused the stoppage. But anyway, it all needs to be looked at, it’s hard now because the results have been reinstated, so we’ll have to wait and see. 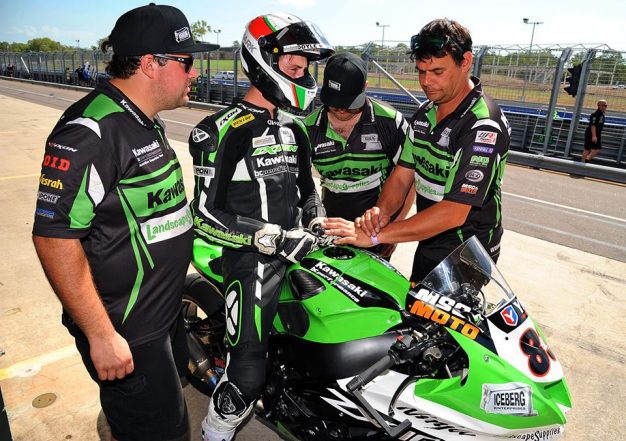 Wayne Maxwell (Yamaha Racing Team):
I don’t know the full facts of the situation, so it would be a bit stupid of me to comment on it. Obviously there was a decision made and it was appealed by Falzon, which is fair and reasonable. They’ve seen more evidence than I have – Motorcycling Australia and the Falzons. He won the appeal and was reinstated, moving forward I guess the next step is for someone to appeal that, then the next process will go through. From the pictures, it doesn’t look good for Daniel, but apparently there’s more evidence in the videos and other pictures. Until I’ve seen all of that, it would just be me saying something that I’m not fully aware of – it could come back looking very stupid on my behalf. For sure there needs to be clarity behind the ruling, people are spending so much money in the sport currently – there’s a lot at stake and it’s not a club event. We basically need to have different rulings on that, we need to be able to go straight to the video to review it, and a decision can be made from there. If Daniel happened to of made a mistake – which they do happen – and caused the crash, basically he should’ve never been allowed to restart, then it wouldn’t of mattered if he appealed or not, because he wouldn’t have been out there.

Peter Doyle (Motorcycling Australia CEO):
First of all, I didn’t actually see the incident. While I don’t profess to have all the information, my understanding is he was removed from the results for causing the red flag in the incident with Kyle Buckley, because they came into contact. Obviously he protested that decision and was reinstated by the jury, which is the steward and some other members – it’s obviously caused a bit of a stir. The best question to ask is: If Kyle didn’t break his leg and no red flag or medical was required, what would’ve happened? So that’s from an officials point of view, not my point of view. The rule’s point of view – and forget who’s right or wrong here – those two riders came together, and they both hit the ground, which you know happens all the time – more so in motocross, but it happens in all disciplines. If neither rider had been injured, there is no red flag – the riders pick up their bikes and continue. In this case, the red flag was issued for RACESAFE to pick Kyle up. In that case, if Kyle didn’t break his leg, what would be the decision? The answer is nothing, if the bike was unrideable then you would be out of the race, and if it was rideable you’d pick it up and keep going. That happens daily in motocross – they get together and fall off, they pick their bikes up and keep going. That’s what I think of the issue, the red flag thing is a non-issue – I don’t have an issue with that decision. If I was to have an issue from what I saw on the weekend, it’s who was in the right or the wrong, and were they being reckless? If the answer was that one of the riders’ actions were considered reckless, then he should’ve been sanctioned for being reckless – it’s nothing to do with red flags or exclusions. I was talking to [Wayne] Maxwell and Paul Free last night, and they actually said yeah that’s right, if two riders crash together – which happens all the time – and there’s no red flag, then your just out of the race if your bike doesn’t go. I don’t have a problem with that side of it, but there appears to be an issue with the fact that people say Falzon should’ve been excluded. What the officials are saying is that they didn’t red flag for the crash itself. You can back up and say the reason Kyle broke his leg is because he had a collision with the other bike, who’s fault is it? In my opinion the determination should be if they can find that somebody was at fault, then they should’ve been sanctioned for reckless riding.