Racer comments from Queensland's fifth round of the year.

A selection of riders detail their day at Morgan Park’s fifth round of the 2017 Yamaha Motor Finance Australian Superbike Championship (ASBK) presented by Motul Pirelli. Team and privateer competitors can submit comments to [email protected] prior to the Tuesday after events for inclusion in the post-event Quotebook feature. 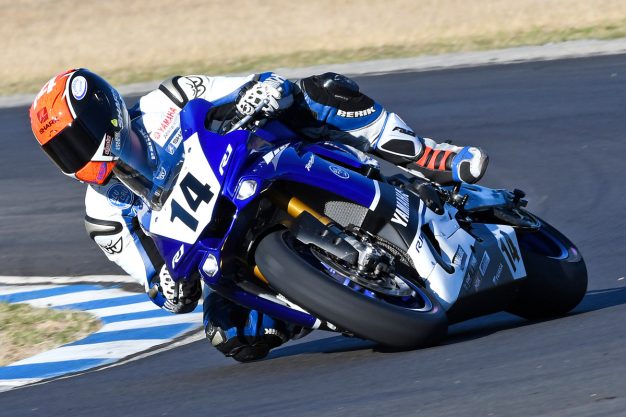 Troy Herfoss (Crankt Protein Honda Racing) – 10th overall:
Sunday is done, it was a mixed day for me – not my best weekend really. After a small tip over in race one, I just made a small mistake and crashed. Unfortunately the handlebar broke and I couldn’t continue. Thankfully the team did a great job and got the bike in perfect condition for race two. I got out there and did my best, I led majority of the race but I just couldn’t bring it home. I was struggling for grip at the end of the race, and some of my competitors were just in a better position than I was and unfortunately dropped to third. A big thank you to the Crankt Protein Honda Racing team for working so hard, it’s been a very trying weekend for them.

Bryan Staring (Crankt Protein Honda Racing) – DNF:
We had a technical problem in the first race, which took us out of it with around six laps to go. That was a bummer, but it can happen. In the second race I was really, really determined to push for a big result there, and I felt like I had everything under me that I needed to get that result. I made a mistake on the second or third lap, I got a little too tight in turn seven and crashed out of the race. My deepest apologies to the Crankt Protein Honda Racing team, especially when I feel like I was ready to challenge for a big result.

Wayne Maxwell (Yamaha Racing Team) – First overall:
I just chipped my way through the pack and the leading riders were not really coming back within striking distance at first. Then suddenly they just started coming back like three or four tenths a lap. I found a rhythm and lucky enough Cru made a mistake between turn one and two which allowed me to get by and take the win. I was so disappointed after yesterday. Seventh position in qualifying wasn’t ideal and I just felt like I couldn’t put a lap together and was riding well below my level. We changed a few things on the bike plus I really wanted to redeem myself after qualifying and combined we were able to turn around our weekend.

Glenn Allerton (Yamaha Racing Team) – Fifth overall:
At this point in time, my injury is what it is and I’m just going to have to deal with it and do the best that I can. I know I’m still a long way off at the moment and I would like to be closer to the front but I just have to keep working on my injuries and hopefully be closer again at the next round. Fifth place in race two was good and quite happy to have scored fifth place overall, but I got lucky. Not a lot of riders like to admit when they get lucky. But I’m happy to put my hand up and say heaps of people fell off in front of me which is why I ended up in fifth.

Cru Halliday (Yamaha) – Second overall:
This is simply a great feeling to be able to win another Superbike race. We have had plenty of challenges thrown at us this year but I never lost faith in the bike, the team or myself and it’s awesome to get back up on the podium for the round. We came here this weekend with our heads screwed on. The whole team has worked hard and we sat down and I actually listened for once, which resulted us in getting the bike the way I liked it to be able to ride and it worked out. I can’t thank my whole team enough! The weekend started strong from free practice one and ended up even stronger at the end of the weekend. I’m just so excited for the next round now, which is my round at Sydney Motorsport Park.

Matt Walters (Swann Insurance Kawasaki) – DNF:
Throughout the weekend the guys on my team did everything I asked, we progressed forward a lot with the bike and my riding and we got inside the top 10 for qualifying. In the first race we had a bit of an electrical gremlin with the bike and we couldn’t really do much about that. The guys did the best they could and got it fixed and together again, which was great. I had an unlucky fall in the second race on the first lap – I just got caught out by the new tyre. That was a bit of a rookie error, but I’ve just got to take that on the chin and move forward. 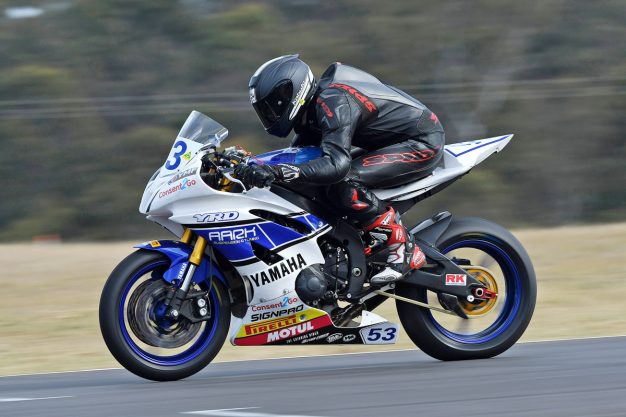 Tom Toparis (Cube Racing) – 12th:
It was definitely good to get on the podium again this morning with second in race one. In the second race we changed a few things and I think we were ready to challenge for a win, but after we got in front of Ted we did a clutch and that ruined my race. Leaving the event in 12th place overall and now sitting third in the point-standings, it will be all about capturing race wins for the remainder of the 2017 schedule according to the New South Wales-based teenager. It’s a disappointing end to the weekend and it puts a massive hole in my championship. Anyway, it’s about winning races from here on and that’s all we can really do. A huge thanks to the team as always and now we look forward to Sydney in a couple of weeks.

Mason Coote (Yamaha) Second overall:
It’s great to be able to get back onto the podium again. The AARK Racing team have supplied me a great Yamaha YZF-R6 since I joined the team at the second round. I just haven’t been able to quite put it all together as I have made to many mistakes. It’s a huge credit to the team for sticking with me. This second place finish is a little treat for them.