The iconic run of Paul Free at the helm of Honda's national racing program.

The confirmation this week that the Motologic-operated Team Honda Racing organisation will be closing at the end of the year rocked the industry, as it’s regarded as the most elite team in Australian Superbike competition. Paul and Laura Free have effectively led a hugely successful program over the course of 15 years, which have all been with Honda aside from a single year fielding Ducatis in 2010, and the success of the team has been incredible when reflecting upon its history (which began in-house with Honda prior to Motologic’s eventual formation as Team Honda Racing). For this week’s Top 10 feature, CycleOnline.com.au reflects upon all kinds of brilliant moments achieved over the years and we have a few more tributes to come before the year’s out. 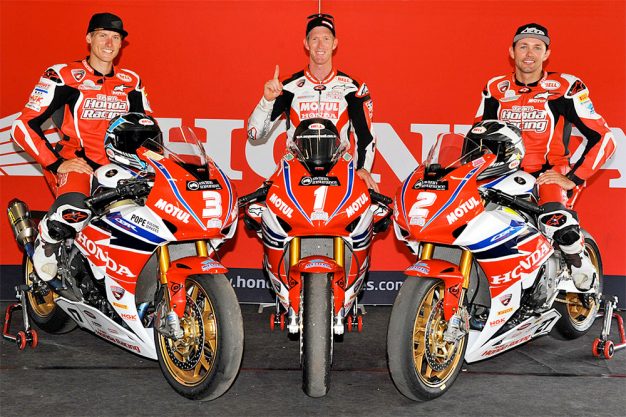 1. Championship sweep:
Perhaps the most iconic photograph of Team Honda Racing came at the conclusion of the 2014 Australasian Superbike Championship (ASC) when Wayne Maxwell, Jamie Stauffer and Troy Herfoss went 1-2-3 in the point-standings. Motologic ran a powerhouse squad that season (with Josh Hook finishing fifth despite missing round one). It was a super-competitive year, so when all was said and done in Sydney, Honda’s dominance was undeniable and extremely impressive. Maxwell also won the Saturday-based Australian FX-Superbike Championship (AFX-SBK) to match.

2. WorldSSP wildcard win with Brookes:
To take victory as a wildcard is no mean feat, but that’s exactly what Australia’s Josh Brookes did with the Free-led domestic Castrol Honda team in World Supersport at Phillip Island way back in 2004. After qualifying third, Brookes stunned on the private bike to win by 0.025s over countryman and world championship full-timer Kevin Curtain, as well as Jurgen van den Goorbergh.

3. ASBK champions on return:
When the factories flocked back to the Australian Superbike Championship (ASBK) in 2016 following a few years in the rival ASC series, the Crankt Protein-supported Honda of Troy Herfoss ultimately edged Yamaha’s Wayne Maxwell to the crown. It was a phenomenal way to send off their aging CBR1000RR SP (largely based on the 2008 model) after a remarkable run home in the season.

4. Back-to-back doubles:
Over a full decade ago when Honda’s racing program was completely in-house and managed by Free, Adam ‘Krusty’ Fergusson delivered their first titles by capturing both the 2004 Australian Superbike and Supersport championships. And the following year, teammate Josh Brookes repeated that success by making it consecutive double championships aboard the then cutting-edge CBRs.

5. Allerton delivers with Motologic:
There was so much interest in the release of the 2008 CBR1000RR and for good reason – it was an absolute weapon for that era. On debut during round two of the series at Mallala, Glenn Allerton soared to pole and both race wins for the overall, going on to clinch his first ASBK championship. That particular title was also to first for Free’s outsourced factory effort at Motologic. 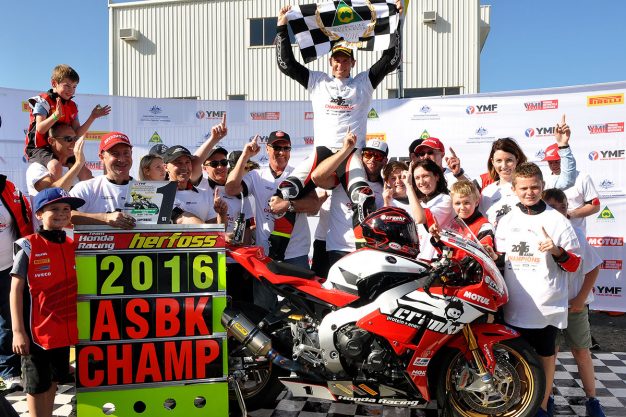 6. Arrival of Herfoss:
After sitting out a year, Herfoss emerged as a privateer for 2014 before quickly being drafted into the official team as a satellite rider of sorts. He claimed third that year and displayed plenty of pace, but by 2015 he proved to be the best in the country by winning both the ASC and AFX-SBK series as their lead rider. It was a mega result that will long be remembered.

7. New model success:
Honda’s domestic race team has been able to quickly extract performance out of new models under the management and ownership of Free. When the all-new 2004 CBR1000RR was released they won on debut with Brookes at Eastern Creek, as they did with Allerton on the 2008 model at Mallala and again, when the revised 2014 SP version debuted at Wakefield Park with Maxwell victorious.

8. First year in:
When Free was first on-board with Honda in 2003, they initially signed an ‘odd-couple’ rider line-up of Brookes and reigning Supersport champion Shannon Johnson, plus also had the late Kirk McCarthy ride later in the year. Brookes/Johnson largely split their time between Superbike and Supersport with podiums being the highlight and the potential was most definitely visible to see.

9. Family dynamic:
In speaking to the Frees about their time at the helm of Team Honda Racing, you quickly realise that to them, aside from the business aspect and end goal of winning championships, the family atmosphere has been paramount. After working with an assortment of racers and instrumental staff, it is this point that they will significantly take away from their time operating Motologic.

10. Branching out:
After achieving so much success in cooperation with Honda on the road race side of the sport, Team Honda Racing took charge of the motocross/supercross program in 2016 and again in 2017. It was always going to be a mammoth task with so many events to cover, however Motologic can take pride in their swift adaptation to what is an incredibly different discipline.