Racer comments from New South Wales' sixth round of the year.

A selection of riders detail their day at Sydney Motorsport Park’s sixth round of the 2017 Yamaha Motor Finance Australian Superbike Championship (ASBK) presented by Motul Pirelli. Team and privateer competitors can submit comments to [email protected] prior to the Tuesday after events for inclusion in the post-event Quotebook feature. 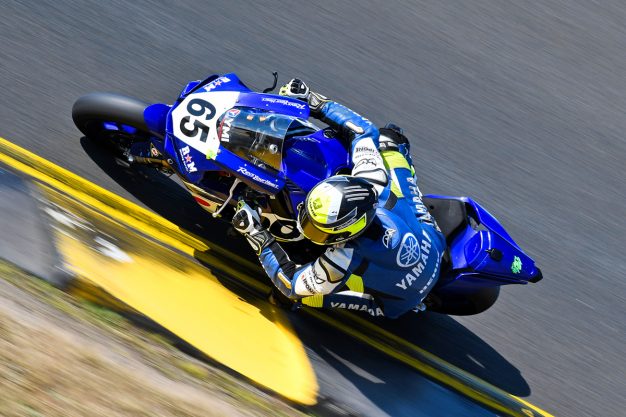 Troy Herfoss (Crankt Protein Honda Racing) – Second overall:
Another epic weekend, things just seem to be going the exact opposite to what everyone thinks with results this season. We had a really difficult weekend throughout Friday and Saturday, I struggled with speed and setup – even in warm up this morning. But we came out in race one and got ourselves a podium in second place, and another podium in race two. Fortunately we’re leaving with the championship lead – a six-point lead – although it’s tight, it’s the biggest championship lead I’ve had going into [the final round]. I’m really excited for Phillip Island now, I’m hoping we can use this momentum and build on it and challenge for race victories at Phillip Island.

Bryan Staring (Crankt Protein Honda Racing) – 10th overall:
We were really unlucky today in race one with a mechanical, but we came back to show our best in race two with a second place. A big thanks to the Crankt Protein Honda CBR1000R SP2 – it was a really, really good race bike today. It was such a pity for the first race, but anyway, we’ll take the points where we can get them and the result, and move onto Phillip Island. A really great result overall for the team with Troy getting back into the championship lead, I hope I can have some effect in sealing that for him at Phillip Island, and meanwhile get the best result I can and win something before the end of the year.

Wayne Maxwell (Yamaha Racing Team) – 12th overall:
Things were going well and I just came into turn three and seemed to hit a few bumps and lost the front. It all happened pretty quick. I might have done some damage to my neck and shoulder but I will get that checked out during the week. No one goes out on track with the intention to crash and I certainly didn’t want to do that. In fact, I didn’t even have the intention of needing to win the race. I just wanted to get a strong result without taking too much risk. But it’s not over yet and I will just go to the final round at Phillip Island with nothing to lose and see what Troy and Josh have got.

Glenn Allerton (Yamaha Racing Team) – Third overall:
It’s an amazing feeling to be up here. You just go through so many emotions when you have a massive injury like what I had. Then the doubts set in. In saying that, I never doubted myself, but the doubt sets in with everyone around you. You always need a good team of people around you that trust you. Kev Marshall and everyone in the team have always believed in me and that has really helped me to come back strong, as everyone has always been positive and aware of my injuries and are trying to help me. Today is a result of all that faith in me and I really want to thank everyone for sticking by me. Overall, I’m really happy with the weekend went and look forward to making more progress at Phillip Island at the final round.

Matt Walters (Swann Insurance Kawasaki) – 19th overall:
Qualifying was really good, we worked well on one-lap pace and the guys helped us a lot. The guys came together with a plan and we executed it really well, which was good. I equalled my personal best around here, so everything went really well in qualifying. In the races we struggled a fair bit. We ended up using a softer tyre in the first race, which didn’t last the laps and we really struggled. We fixed that problem by putting a harder tyre on for the second race and it was really good, we were up within the top seven or eight and the bike was feeling good, but then I had a bit of an issue with the bike and the race came to a screaming holt. I’m happy to be in that group, that top group, I know I’m a little bit off the first, second and third places, which is fair, but being inside the top 10 just about every time is great for me, along with qualifying better than we had been, which makes it a little bit easier in the races. It’s definitely a confidence booster, but I’m just struggling to finish races now with a bit of bad luck. We’ve got two races to go and obviously I can’t win the championship now, but I’ll just go out there, keep trying hard together as a team and see where we end up.

Corey Turner (DesmoSport Ducati) – eighth overall:
In race one I struggled a lot, because we did make a little change before the warm-up and it worked with the used tyres on, but then we threw the new set on and we just struggled all race. We ended up going back to our qualifying set-up for race two and it was a lot better. My start wasn’t great, but I slowly found my feet and we actually caught back up to that final podium place group and we closed the gap right up. It was a bit of a disappointment because I do feel like we were in the mix for a good result in race two. Anyway, we still bagged some points and I’m really looking forward to Phillip Island.

Robbie Bugden (BCperformance Kawasaki) – Fourth overall:
Overall it wasn’t a bad weekend. Most importantly it kept us well in the championship going into the last round.We didn’t get qualifying quite right and it cost us over the weekend as starting in 11th didn’t reflect our pace. Once we got into the races we had some good laps and made our way forward. Full credit to the team – we had to grind that one out but everyone stood up and made it happen. We didn’t lose too many points overall but most importantly we are still well in the hunt for the championship title at Phillip Island.

Kyle Buckley (BCperformance Kawasaki) – 15th overall:
The biggest hindrance wasn’t the injury on the track but being off the bike and having to stop training while my leg healed up. I got back on the bike and trained as hard as I could in the weeks leading up to this round, but it’s hard to be in full form once you’ve have a big break from riding due to recovery. The team worked well, the Ninja ZX-10R is fast and handles well, however it wasn’t going to be a perfect weekend coming back from a broken leg. We are looking forward to Phillip Island though and we are going to finish the series off well. 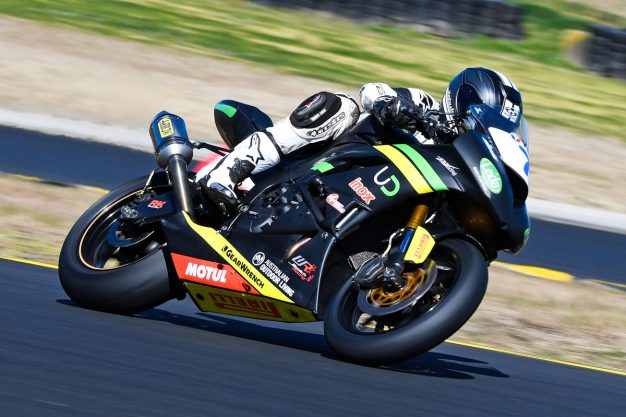 Tom Toparis (Cube Racing) – 14th:
Apart from the start in race one, I believe we were 100 percent capable of winning that one. My start was bad again in race two and I was slowing moving forward looking after the tyre before I copped a massive shunt from behind into turn two – next thing I knew, I was on my head flying along the ground. The crash was pretty bad and the bike is pretty destroyed, but physically I’m not too bad. I’ve just had no luck at all this season, but we’ll move onto the next round at Phillip Island and it should be good hopefully.

Mason Coote (Yamaha) Second overall:
It’s been an incredible weekend. It’s the first time in a long time since the AARK Racing team and I have managed to produce a double podium finish with a 3-3 result and make it back-to-back round podiums. With the championship being put beyond reach, Coote is looking to consolidate second place in the championship.