Racer comments from Victoria's seventh round of the year.

A selection of riders detail their day at Phillip Island’s seventh round of the 2017 Yamaha Motor Finance Australian Superbike Championship (ASBK) presented by Motul Pirelli. Team and privateer competitors can submit comments to [email protected] prior to the Tuesday after events for inclusion in the post-event Quotebook feature. 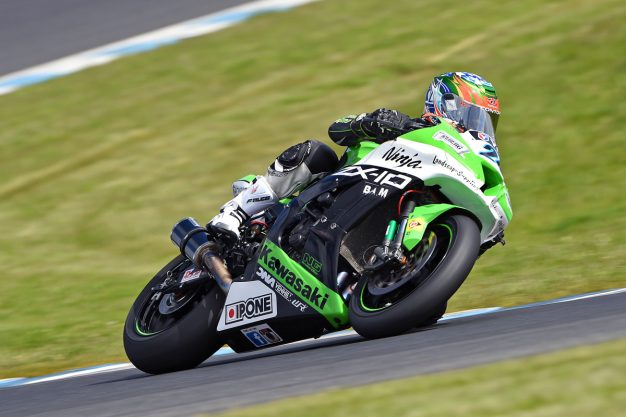 Josh Waters (Team Suzuki Ecstar) – Second overall:
It’s an unbelievable feeling to win another ASBK title in my first year with Team Suzuki Ecstar Australia and also with the new GSX-R1000R. At one stage we were near 60 points down, so to turn that around and even be in the position to challenge for the championship at the last round was an achievement for everyone. It’s just unbelievable – I still can’t believe it. The championship is that tough at the moment, so this is pretty special. The aim was to win race one and then in race two I knew what I had to do, but it wasn’t easy and I had about a trillion things going through my head. It just feels really good to win this title and it played out the way we needed to, so thank you to everybody who has supported us and all of the team’s partners as well.”

Troy Herfoss (Crankt Protein Honda Racing) – 10th overall:
It was a very, very difficult weekend, and unfortunately, I didn’t get the job done this year. I had a mechanical in race one with a small oil leak, I was going backwards and backwards until it was basically not possible to continue riding. We bounced back in race two and challenged for the lead, finishing second in the final race. It’s a tough one for me to explain, it’s easy for to get angry or whatever, but at the end of the day, there was a small mistake in race one, and I made a mistake myself at Morgan Park. My competitors made mistakes also throughout the year, and I want to congratulate Josh on the championship and we’ll try again next year. Thanks to our fans, friends and thanks to the team.

Bryan Staring (Crankt Protein Honda Racing) – Fourth overall:
Unfortunately, again we’ve had a mixed day. I had flat front tyre in the first race, which is basically unheard of our sport. Anyway, I had a really strong second race and I did everything I could – it was actually a really good intense battle. A huge thanks to my Crankt Protein Honda CBR1000R SP2, it was really, really good this weekend and we should’ve had a better overall result – I couldn’t have done any better in that last race, so I have to be happy with my efforts there. Thanks to the team for the season, we still have one more appearance here for the grand prix in a couple of weeks, and a big thanks to my personal sponsors Consent2Go and Berrysweet Strawberries – we’ll see everyone next year.

Matt Walters (Swann Insurance Kawasaki) – 11th overall:
We had good practice sessions and qualifying this weekend. We’ve made improvements to our qualifying and we’ve moved up onto the third row a couple of times now, which has been good. We didn’t have a great race in the first one this weekend. I had a bit of a run off at turn one, which is kind if my fault as we ran the corner a bit hot and a bit wide. The second race was good, we made sure the bike had the right tyres on it, so it was pretty good. We had a couple of good battles there and just moved forward at the end of the race. We came good and got inside the top 10 again, which is a pretty good way to finish off the year. I would have like to have been further up this year, but we had a couple of struggles and a couple of moments there. We just need to try and capitalise on these next three months and really push super hard. I’m fairly capable of doing some winning, I just need to get myself in the right frame of mind and physical form to do it.

Corey Turner (DesmoSport Ducati) – DNF:
I was following Alex Phillis and Jed Metcher on the sighting lap and I think I just got unlucky. I came up to turn 11, I wasn’t hard on the gas or hard on the brakes – nothing – it just stepped out on the rear in the mixed conditions. I thought I saved it, I still had my hands on the bars, but at the last minute I got a tank-slapper and it spat me off. I picked the bike back up and it didn’t look bad at all, but the actual throttle handle had broken off, so I couldn’t ride it back to the pits. It was a marathon, but I ran back to the pits incase the boys had a wet bike ready, which they did. They threw some slicks on it but the front warmer had only been on for about five minutes, so they told me to take it easy. I went out on that, but obviously we had it set-up for the wet, so it was just too hard to ride and I was last anyway, so we called it a day on that one. We were really looking forward to race two, the boys got my number one bike going again. I had a really good first lap and made up a few positions. I think a couple of laps in the steering damper bracket was cracked from the crash and it finally let go. With the wind out there, it was just too much and I was rolling off down the straights. There were a few other things that I think were damaged from the crash in race one, so it was a pretty disastrous weekend for us and I’m devastated for the boys – they worked so hard. I think we just scraped in for Rookie of the Year, so at least we’re walking away with that! and thank you to everybody for the support.”

Robbie Bugden (BCperformance Kawasaki) – 14th overall:
The weekend started fairly well, the bike felt good straight away on track but it all went pear shaped in second practice. A small shower came over the track and as I was tipping into turn one, I didn’t pick the track was slightly wet there, because the rest of the track was dry. As I tipped in, the back of the bike came around. Turn one is a place on the circuit you don’t want to high side at 230km or so per hour. It looks like I sustained some broken ribs, a broken finger and damaged foot. From there on in it was a battle. It was a real shame. We tried to claw our way back. In the first race I got up to 5th or so and didn’t have the endurance to finish off well as my core was sore. I just want to thank Kelvin (Team Manager), the team and every single one of my sponsors. It has been a really good season and we were on the podium more times than not. We were second on the leader board at one stage and the championship was within reach but all in all it has been a great season and it’s been a real pleasure. So now I’ll need to take a breath and see what next year holds. 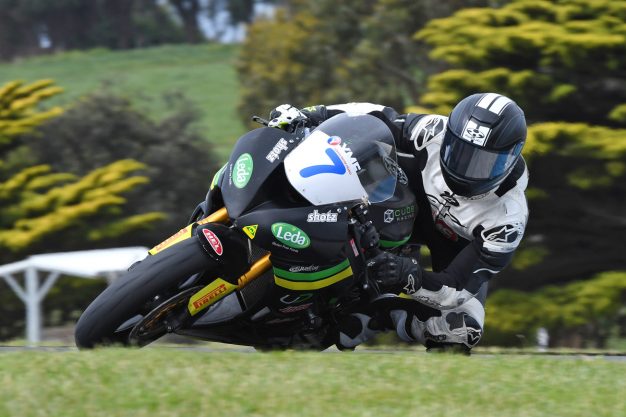 Tom Toparis (Cube Racing) – Second overall:
Today was pretty good, honestly I expected to be closer in race one and I definitely expected to battle for the win. The wind change was just too much for me and I couldn’t deal with it, so that was the reason why I was so far off in the first race. We went back and changed the bike completely for the second race and we could run with the leader. I was so close to him but I just couldn’t show him a wheel anywhere really, I struggled with rear grip onto the straight in the final turn and that stopped me from getting a tow. The day was good overall though, I got a whole bag of points and we were going pretty fast considering the windy conditions. This season I’ve learned a heap obviously, and I’ve learned pretty much every track in Australia now, so next year we should be strong no matter where it goes in all conditions. I can’t thank the team, my family and everyone else enough for what they’ve done for me this year, to gain all of the knowledge that we have this year will be a big head start coming into 2018.