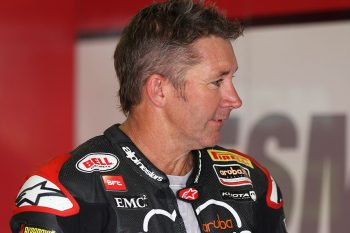 The legendary 48-year-old has confirmed his return to racing in the national championship, which he last contested in 1997 prior to embarking on a glowing international career that included winning the world championship in 2001, 2006 and 2008.

“It was a situation we first considered when Callum [Spriggs] was injured,” said Bayliss, who will ride a twin-cylinder 1299 Panigale R Final Edition rather than Ducati’s new V4 variant to be released next year. “Obviously, it was a big call and it didn’t quite feel right at the time.

“Since then, I have tested the bike and completed a lot of miles both in practice and racing the 300 class. Initially I did want to see another young guy on the bike, but after I rode it I felt that I needed to contest the championship and try and win myself the elusive Australian Superbike title.

“I definitely feel like I have some unfinished business. I have a bit of work to do in terms of fitness, but after testing the bike and running it at the Adelaide Motorsport Festival, I feel I am definitely up to the task.”

While complete details on the DesmoSport Ducati’s structure to accomodate Bayliss as the rider remains to be announced, outgoing Team Honda Racing boss Paul Free has been linked to the program when he moves from Melbourne to the Gold Coast for next year. It’s understood the extent of his involvement is yet to be finalised.

Bayliss formed the factory-supported DesmoSport Ducati operation as co-owner with Cube Racing founder Ben Henry ahead of the 2016 season, campaigning then reigning champion Mike Jones last year and claiming fifth in the standings. This year the team began with Callum Spriggs prior to him being injured, later drafting in eventual Rookie of the Year Corey Turner with mixed success.

The decision for Bayliss to steer DesmoSport Ducati’s lone factory-supported entry comes as a surprising one of sorts, despite being heavily rumoured during the past month. He retired from the sport at the conclusion of 2008, only to return to Ducati’s WorldSBK team in 2015 for a number of successful cameo appearances at Phillip Island and in Thailand.

Next year is shaping up to be a busy one for the Bayliss family, as Troy’s return to competition coincides with talented 14-year-old son Oli’s second full year of road racing in the ASBK Supersport 300 ranks. The latter will once again be placed within Henry’s Cube Racing squad.

Bayliss’ ASBK career spanned two seasons over 20 years ago, finishing third as a rookie in the 1996 season with Kawasaki and then going one better for the runner-up place in 1997 after switching to Suzuki. He transferred to the British Superbike Championship for 1998 with Ducati, going on to clinch the crown in 1999. His move to WorldSBK via a short stint in America came following the injury of Carl Fogarty in 2000.

Once in WorldSBK, Bayliss won the title at his first full attempt in 2001, then was second in 2002. He switched to MotoGP for three seasons between 2003-2005, with a best result of sixth in the standings as a rookie, only to return to Superbikes in 2006 where he would round out his career. However he would make a one-off return to MotoGP at Valencia in 2006, picking up the lone grand prix win of his career.