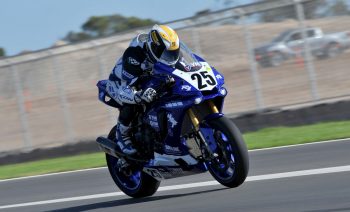 It was a prosperous weekend for the Yamaha Racing Teams at round three of the Australian Superbike Championship, held at the new Bend Motorsport Park, in South Australia. Two class wins from the three contested, five out of six riders on the podium and every rider inside the top five in the series standings are the vital stats to take away from the weekend.

Wayne Maxwell and Daniel Falzon stood on the podium together for the first time this year in the premier 1000cc Superbike category, taking second and third respectively, while Hunter Ford chipped in with a podium performance to take third in the 300cc Supersport race.

To view the bLU cRU round recall : https://youtu.be/fJkCf8gaqoQ

John Redding – YRT
“As a whole, the weekend went well for us with all three riders on the podium and the Yamaha’s performing well on a circuit we had never used in race conditions. The weekend required some good knowledge in the pit sheds as the riders got accustomed to the new circuit.

“Cru did an amazing job and is really gelling with the Yamaha R6. From a sluggish start at round one at Phillip Island to how he is riding now is a huge improvement and the bike has been developed accordingly and we are really pleased with how he is going.

“Wayne and Daniel also rode well to both get on the podium in the Superbike class. Both were very competitive in all three races, with Wayne winning the first one of the round and then Daniel challenging Herfoss in the final race.

“It was a round we can all take some confidence from and with a small break in the calendar, gives Kevin and Geoff time to rest in the work shop and prepare for a strong finish to the remaining four rounds.”

Ian Irving – bLU cRU 300 Racing
“It was another exciting weekend of racing with the 300cc Supersport class again providing some close and intense racing. All three races came down to a drag to the finish line and as many as seven riders all battling for race wins.

“Tom Bramich got the win on the weekend and proved to be as smart as he was fast. He was very consistent in every race and kept putting himself in good positions and charged all the way to the end.

“Both Hunter and Zac showed good speed but also had one race where things didn’t go to plan and that cost them dearly in the points at the end of the day. Both were a little disappointed but will bounce back strongly at the next round in Darwin.”