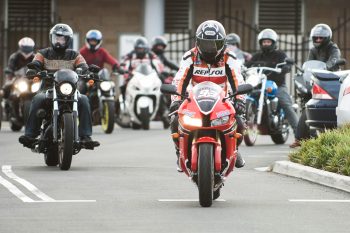 The 2018 edition of Ride Sunday has been hailed a success after raising just shy of $200,000 (USD) for a number of important charities that are set to benefit from the funds.

The global ride, which is open to all disciplines of motorcycling, saw 1300 riders participate in 239 events across the world, while over 134,000 kilometres were pledged on the 3 June event.

To promote participation and competition in the fundraising ride, Ride Sunday pulled together a host of companies to support the ride, offering significant prizes that included a brand new motorcycle for the top three fundraisers.

Mark Wotherspoon raised a tremendous $20,444 for White Ribbon Australia, securing himself as the highest fundraiser globally. Mark was rewarded with a motorcycle of his choice for his efforts, selecting a new bike from Harley-Davidson.

Blue Boy, who chose to remain anonymous, was hot on Mark’s tail as the second highest global fundraiser, raising an equally astounding $17,053 for the Movember Foundation, selecting a new bike from Triumph Motorcycles, while Sean Mooney rounded out the top three, raising $12,757 for the Sydney Story Factory, and was duly rewarded with a Royal Enfield.

Ride Sunday has already locked in a date for the 2019 instalment, scheduled for 2 June as it endeavours to become the world’s largest motorcycling charity event by 2020.