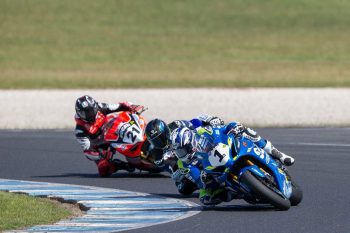 Phillip Island hosted the final round of the 2018 Australian Superbike Championship (ASBK) and Team Suzuki ECSTAR Australia was a force to be reckoned with. Qualifying second with a time of 1:32.106, Josh Waters was under the previous lap record and continued that form with a 1-7 finish for third overall. It was a different story for Markus Chiodo, qualifying eleventh after taking some time to find his rhythm. The young Victorian wasn’t able to finish either race on Sunday.

Team Owner Dale Brede: “No better way than to finish the year than with a win! It’s unfortunate that Markus had the weekend he did. It doesn’t show the progress he’s made as a racer over the year, but the speed and position he held in race two does show his potential. As for Josh, what a way to close out the year. The guys gave him a great package, and although they worked hard all weekend to keep improving, Josh was in the lead group all weekend and was very close to two race wins. For Team Suzuki ECSTAR Australia, our season is now officially over and we start to finalise our plans for 2019. I can’t thank our team enough for their hard work all year. Without each one of you, we might as well be at home. To our sponsors: Without each of you, we simply couldn’t go racing. Although we didn’t win the title this year, we did win ‘best presented team’, showing our commitment to showcasing you and your support for us, to the best of our ability, both on track and off it. Thank you for supporting Team Suzuki ECSTAR Australia.”

Josh Waters: “What a way to finish out the season! Qualifying was fast, with two of us going under the lap record, and the races were just as fast. After winning a close battle in the first race, I went under the previous best lap during race two, just to push forward into the three riders ahead of me. Unfortunately, I thought Bayliss was going to go for a pass into MG on the last lap, and, attempting to protect my line, I crashed, but was able to remount and finish in seventh, just 19 seconds behind Troy. I have to give a huge thanks to Dale, Phil, Brodie and the entire Suzuki ECSTAR Australia race team for working hard all year to help me succeed. Although I’m on track alone, this is a team sport and I couldn’t go racing if it wasn’t for these people and our amazing partners.”

Markus Chiodo: “It took me a little too long this weekend to feel comfortable and to go fast. I thought that on Phillip Island, usually being my strongest track, I would be closer to the front guys, if not with them, through qualifying. For Sunday, I felt more comfortable with the direction we went with the bike, but I made a mistake into turn 10, ending my race. In race two, while in a clear fifth position and feeling strong, we unfortunately had a small mechanical issue with three laps to go. I’d like to thank the team for their support this year, and Dale for giving me an opportunity, hopefully, next year, I can run with the front guys and push for some good results.”

Team Suzuki ECSTAR Australia’s 2018 ASBK campaign is now over, with the team heading back to their home base in Canberra to finalise plans for 2019.

See the image gallery below for a brief season recap!

Click HERE for the full results from round 7 of the Australian Superbike Championship.

Make sure you follow the team on social media to stay up to date with the team and any news over the break: