Bautista tops WorldSBK testing on day one at Phillip Island

Wildcards Herfoss and Toparis 19th and 14th in their respective categories. 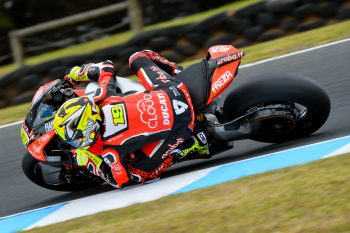 After three weeks of rest the FIM Motul Superbike World Championship riders were back in action today at Phillip Island Grand Prix Circuit for the final pre-season test before the season premiere.

The Spaniard’s best lap of 1m30.743s could be interpreted as an early warning shot to the 17 other men on the grid. Race performance remains an unknown, but the 34-year-old is as fast as they come – and this was just his seventh day onboard the Superbike, with much of the focus for Bautista and his crew still centred around adapting to the softer WorldSBK tyres.

It was far from a flawless opener for the Aruba.it garage however, as Chaz Davies (Aruba.it Racing – Ducati) lingered at the bottom end of the timesheets for both sessions. Still searching for an ideal base setup, the Welshman found some technical issues early on and was unable to match his teammate’s pace. Much work left to be done on day two for Davies who nonetheless, it’s worth noting, usually excels in race conditions.

The other two Panigale V4 Rs on the 2019 grid also continued developing and discovering the new red beast. Eugene Laverty (Team Goeleven) focused on base setup as well as improving the feeling on the rear of the bike, while Michael Ruben Rinaldi (BARNI Racing Team), making his Phillip Island debut, fixed his attention on their new Showa suspensions.

Jonathan Rea and Leon Haslam (Kawasaki Racing Team WorldSBK) were the two first men out on track in the morning and showed similar pace, finishing the day in third and fifth respectively. The Englishman, fully adapted now to the WorldSBK-spec ZX-10RR, chose to test his tyre selection for Australia, while the four-time world champion overcame a crash at turn 10 to be the best Kawasaki on the day, while also trying out the new Pirellis.

Turkish Puccetti’s Toprak Razgatlioglu also appeared to be making ground with the 2019 ZX-10RR, as he set the tenth fastest lap on his first day with the new engine, rising above his fellow Kawasaki privateers.

A clear frontrunner for the title of ‘Mr Consistency’ during winter testing, Alex Lowes again finished inside the top two here at Phillip Island, 0.403s behind Bautista. Both the Englishman and Michael van der Mark (Pata Yamaha Official WorldSBK Team) – seventh on Monday – set out to confirm the good results from both January tests, the YZF R1 looking already like an incredibly competitive package.

The other two Yamahas on the grid also excelled on day one, as the Japanese manufacturer managed to place all four bikes inside the top eight. Marco Melandri (GRT Yamaha WorldSBK), sixth, tried out some new solutions before entering the finetuning stage tomorrow, while Sandro Cortese (GRT Yamaha WorldSBK) – eighth – rode his first laps on a Superbike at Phillip Island.

This was also a fruitful day for the two BMW bikes, fitted with a new chassis and swingarm link for the first time. Both riders continued to build confidence onboard the S1000 RR, with a stunning Tom Sykes (BMW Motorrad WorldSBK Team) in fourth position having the edge over Markus Reiterberger (BMW Motorrad WorldSBK Team), ninth fastest. The Yorkshireman was in fact second fastest in the second session – a sign that the BMW might be ready to fight for podiums right from the get-go.

After several months of swirling rumours and working outside the spotlight, Monday was also the day we finally got to see the Moriwaki Althea Honda Team in action. The first signs would seem promising, as Leon Camier (Moriwaki Althea Honda Team) edged close to the top ten with a bike still in an early development stage. Australian wildcard Troy Herfoss (Penrite Honda Racing) wound up 19th with a time of 1m34.961s. 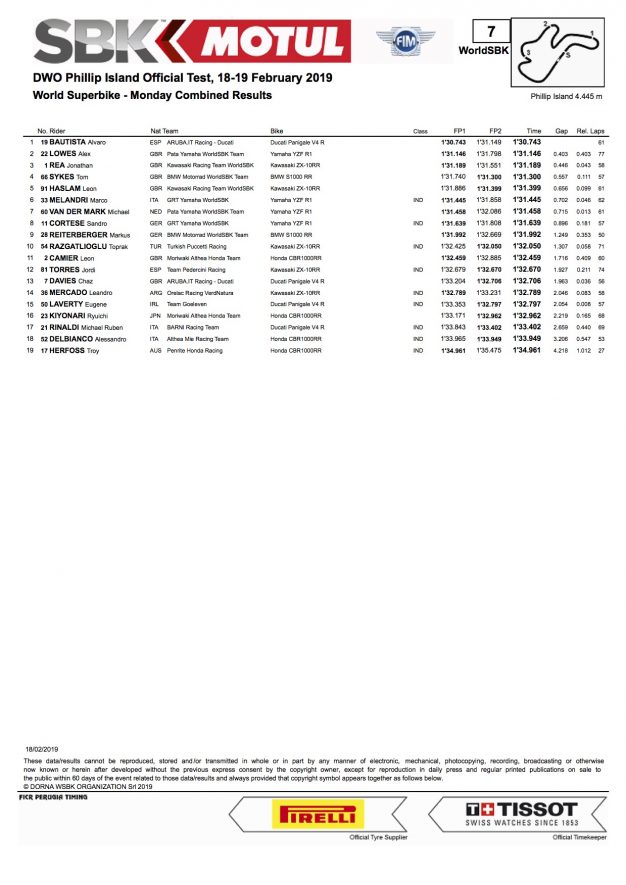 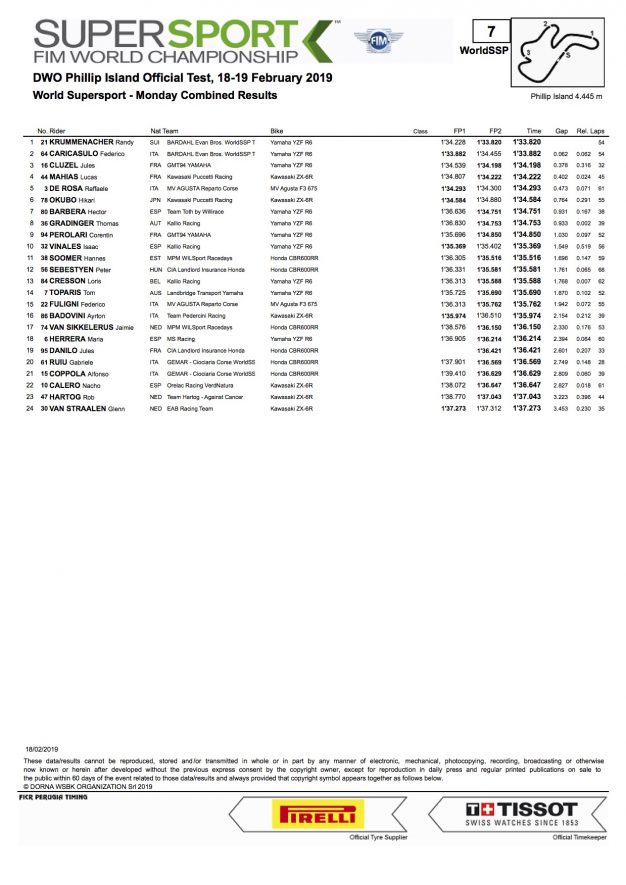