Sykes and Haslam round the top three as Herfoss finishes 19th. 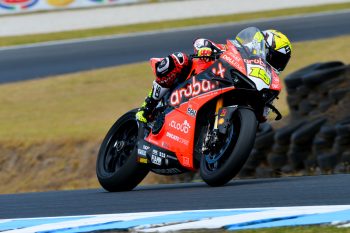 Alvaro Bautista (Aruba.it Racing – Ducati) stormed to the top of the timesheets again on Tuesday at Phillip Island Grand Prix Circuit with a best lap of 1m30.303s, a whole 0.440s faster than his best from the previous day and nearly half a second quicker than four-time world champion Jonathan Rea (Kawasaki Racing Team WorldSBK), who was fourth fastest at the Aussie racetrack.

Tuesday morning saw kinder winds and warmer conditions than the opening day of FIM Motul Superbike World Championship (WorldSBK) testing. Despite this, the bar that Ducati’s Spaniard had set on Monday remained unsurpassed by all but three riders.

Bautista has emerged as the early and clear frontrunner for the opening race of the WorldSBK, and it will be interesting to see who, if anyone, can match the hairsplitting pace he’s put on display here.

In between them in fourth sat Jonathan Rea, who had previously topped nearly every pre-season testing session in 2018 and 2019. No one will be disregarding the reigning world champion any time soon however. It bears repeating that Rea is still on an 11-race winning streak and when he is on his game there are few, if any riders capable of going the distance with the four-time champion.

But for now, the gap between the two men has been striking – just in the first Tuesday session, Bautista recorded seven laps faster than Rea’s then best of 1m30.761s.

Testing is much more than setting fast lap times however, and there was again much work to be done on Tuesday in Australia. Rea’s teammate Leon Haslam (Kawasaki Racing Team WorldSBK) made great strides on the ZX-10RR, putting in more laps (74) than anyone out on track.

he Englishman’s base setup is very similar to the reigning champion’s, with Haslam’s crew now focused on tweaking it to his own style. It seems to be working well, as a late flurry of times pushed the 35-year-old above Rea on the timesheets.

Chaz Davies (Aruba.it Racing – Ducati) meanwhile managed to cut down his best lap time from Monday by a full second, as he continues to find his feet on the Panigale V4 R, although the Welshman was still nearly 1.5s behind his teammate’s pace.

2018 double Aussie winner Marco Melandri closed Tuesday as fifth best after hard work was put in to the front of his Yamaha YZF-R1. With an optimal setup now in place, attention veered towards finetuning in the afternoon. Ditto for the rookie Sandro Cortese (GRT Yamaha WorldSBK), eighth at Phillip Island.

A big midday crash down turn one and a late tumble across turn four for Alex Lowes (Pata Yamaha Official WorldSBK Team) were the main setbacks on Tuesday for the Crescent Racing squad. Neither the Brit – ninth – nor Michael van der Mark (Pata Yamaha Official WorldSBK Team) – seventh – were far off the pace, however, with their attention focused on finding a good balance for the always treacherous Aussie track.

A series of red flags in the morning hindered many a race simulation around the paddock, but it was still a good day’s work for the BMW Motorrad squad as both Sykes and Markus Reiterberger – struggling yesterday with a small shoulder injury – tested different chassis solutions, with both men meeting expectations.

A tricky opening day for Moriwaki Althea Honda Team led to improved performances on Tuesday, as they fight against the clock to find a good base setup for Phillip Island. Leon Camier (Moriwaki Althea Honda Team) crept into the top 10 throughout most of the day with a best lap of 1m31.443s, eventually falling to 13th,, while Ryuichi Kiyonari ended in 15th position.

A late fastest lap pushed Toprak Razgatlioglu (Turkish Puccetti Racing) up to a fantastic sixth in the Tuesday standings. The Turkish starlet is still going through the 2019 updates on the ZX-10RR, as was the case for Jordi Torres and Team Pedercini Racing, while Tati Mercado (Orelac Racing VerdNatura) focused on improving tyre preservation.

The WorldSSP category was topped by Randy Krummenacher and Federico Caricasulo (BARDAHL Evan Bros WorldSSP Team). The yellow and black-clad racers were followed in the timesheets by Raffaele De Rosa (MV Agusta Reparto Corse), with the top six seemingly a cut above the rest. Australian wildcard Tom Toparis (Landbridge Transport Yamaha) wound up 17th in the times. 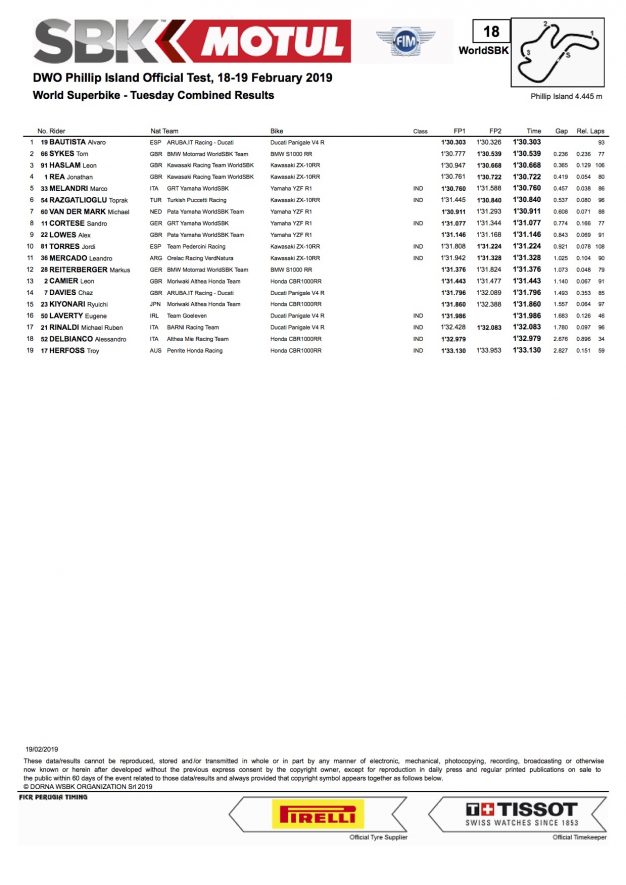 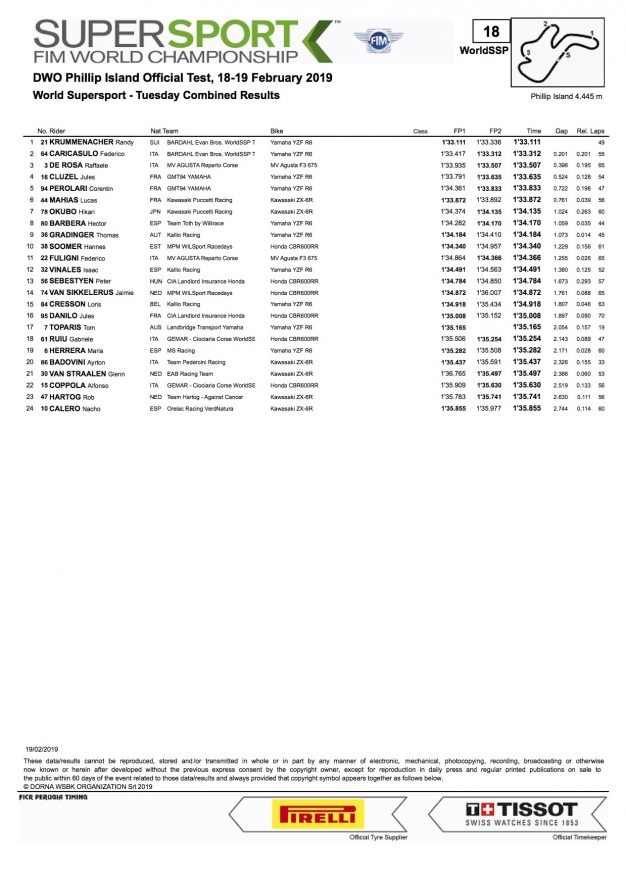