Notes from trackside in Victoria at the opening round of the season.

We’re at round one of the 2019 Motul Pirelli Australian Superbike Championship (ASBK), held at Phillip Island in Victoria alongside the Superbike World Championship (WorldSBK) Yamaha Finance Round. Express is a compilation of our pit notes from across the weekend so far. 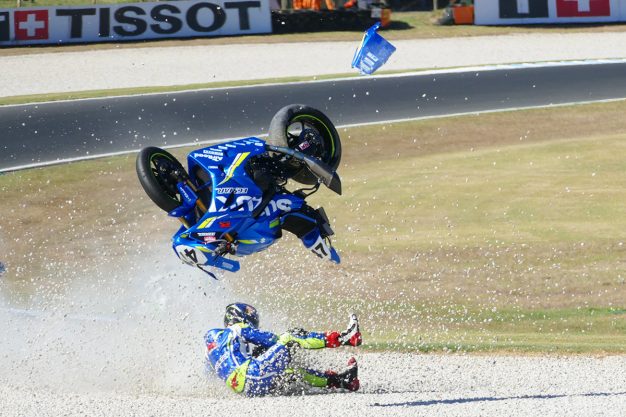 – The clash between Wayne Maxwell and Aiden Wagner on Saturday afternoon in Superbike race two caused much debate in the paddock and on social media directly afterwards. So, was it a racing incident or was there more to it? The officials deemed Wagner’s move to be acceptable and there is no doubt that he was hungry for the win, but behind closed doors Maxwell was said to be fuming since his Team Suzuki Ecstar debut was derailed and the GSX-R1000R destroyed in the turn 12 crash. Bring on race three and into Wakefield Park!

– Triple world champion Troy Bayliss’ season didn’t get off to an ideal start this weekend, fracturing the little finger on his left hand on Friday in a major shunt and then breaking the middle finger on his right hand in that opening race fall at turn one. The plan is to undergo surgery on Tuesday and then return as quickly as he possibly can.

– The DesmoSport Ducati team has been using its 1299 Panigale FE at the opener since the new V4 hasn’t been developed in ASBK race specification yet and it’s unlikely to debut until The Bend’s third round, while over at Next Gen Motorsports both Glenn Allerton and Ted Collins are still on the existing BMW S 1000 RR. Interestingly, Kawasaki-supported racers have switched to the Ninja ZX-10RR for the new season.

– With reigning national champion Troy Herfoss pulling double-duty this weekend in ASBK and WorldSBK, his Penrite Honda Racing team has two separate pit boxes for he and new teammate Mark Chiodo. Since he is in the world championship races, Herfoss is in the regular pit lane, while Chiodo’s based with the rest of the national supports in the back section of the paddock even though both obviously are working out of the same transporter.

– How much attention do the internationals pay to the ASBK on race weekends? A lot. With the local Superbike races vastly outshining race one of WorldSBK on Saturday, many riders and teams from overseas were glued to the coverage delivered via the trackside WorldSBK TV programming.

– On the subject of television, it’s been a huge bonus this year to have the ASBK Superbike races televised on Fox Sports live during the WorldSBK broadcast. With Kevin Magee and Steve Martin in commentary, those who tune into Phillip Island to watch Jonathan Rea and co. will surely pay more attention to the national championship following yesterday’s fireworks.

– We knew Cru Halliday was in serious form last year on his way to the Supersport crown, but few anticipated he would be comfortably running at the pointy-end during round one – especially at a circuit he considers to be a ‘bogey track’ of sorts. Not only was he on the front row and in the mix during both races, he appeared to have comfort in doing so and that’s a good sign heading into the tighter tracks on the calendar. Confidence is crucial in this game.

– Those with a sharp eye for detail would have noticed that the Yamaha Racing Team of Halliday and Daniel Falzon are now equipped with Pirelli branding on their YZF-R1Ms. Although the Queensland-based factory organisation has been on the Italian tyres for over a year now, this year is the first time that they’ve directly advertised that fact due to a new partnership with Link International.

– It’s evident that the latest Yamaha R6 is the bike to be on in Supersport this year, filling no less than the top eight positions in race one and then the top six in race two. Considering the benchmark that Halliday set last season, it will be interesting to monitor lap-times that the field can manage across the seven rounds in 2019.

– After spending the official test on Dunlop tyres, Next Gen Motorsports has reverted to Pirellis for this weekend with both Allerton and Ted Collins. We haven’t confirmed whether or not they will switch to Dunlop for Wakefield Park since Allerton conducted a strong race simulation there on new-spec rubber in the pre-season, however time will tell.