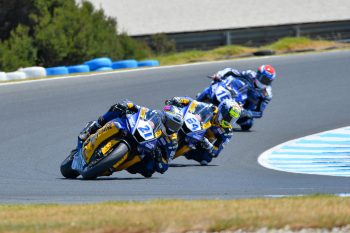 The 2019 FIM Supersport World Championship (WorldSSP) started with a bang at the Phillip Island Grand Prix Circuit, with thrilling overtakes, dramatic crashes and pit-stops all shaping the opening race of the year, but it was Randy Krummenacher (BARDAHL Evan Bros. WorldSSP Team) who ultimately took out top honours.

With the starting lights turning to green, it was a lightening start by Jules Cluzel (GMT94 YAMAHA) from third on the grid, ahead of Federico Caricasulo (BARDAHL Evan Bros. WorldSSP Team) and teammate Krummenacher.

By the end of lap one, Caricasulo slipstreamed his way into the lead and but not for long, as Swiss teammate Krummenacher did the same to Caricasulo. Cluzel relegated to third after leading for the opening lap. Thomas Gradinger (Kallio Racing) and Raffaele De Rosa (MV Agusta Reparto Corse) rounded out the top five.

On lap three, Raffaele De Rosa suffered a big highside crash on the exit of turn two, ending his bid for a podium at the start of the year. He wasn’t the only crasher on the opening lap, as Estonian Hannes Soomer (MPM WILSport Racedays) crashed at turn six. Back at the front, Jules Cluzel began closing the leading duo of Krummenacher and Caricasulo down, making it a trio of Yamahas at the front of the field.

Caricasulo managed to fight his way past his teammate at turn one, where he stayed for just over a lap. Krummenacher managed to get his lead back at turn four, shaking his head at teammate Caricasulo as the two battled on circuit. Cluzel’s lap times dropped off, leaving him around a second adrift of the BARDAHL Evan Bros. WorldSSP Team Yamahas. Having taken the lead, Krummenacher pitted first for the mandatory tyre change at the first possible chance. Cluzel followed him in.

With Caricasulo out at the front, trying to make up as much time as possible with a clear circuit, it would all come down to which side of the BARDAHL Evan Bros. WorldSSP Team garage would be quicker. As Caricasulo pitted for the mandatory stop, the rear tyre jack was left attached to the YZF R6 Yamaha upon exit, costing the Italian a chance to fight with his teammate for the win. He exited in third place, once the pit stop phase was complete.

MV Agusta Reparto Corse’s day went from bad to worse as rookie, Federico Fuligni crashed at turn 10 on his WorldSSP debut. Fuligni and De Rosa will seek to fight back at the Chang International Circuit in Thailand.

As the race entered the final stages, Jules Cluzel was handed a 1.3s penalty, after his pit intervention time was too fast. With Caricasulo charging hard in third position, Cluzel had pressure to retain his second place.

One position that hasn’t looked in doubt throughout testing and the Yamaha Finance Australian round was first place. Randy Krummenacher celebrated his 29th birthday in style by starting the season as he did in 2016 – with a glorious victory – his third victory of his WorldSSP career! Cluzel fended off a charging Caricasulo as they completed the podium in that order.

Hector Barbera finished in fourth at the end of the race, having a great ride from seventh on the grid – the Spaniard’s experience coming to the fore. Thomas Gradinger completed the race in fifth place, as his quest to give Austria a first ever WorldSSP podium continues. Hikari Okubo (Kawasaki Puccetti Racing) was a superb sixth, ahead of Corentin Perolari (GMT94 YAMAHA), 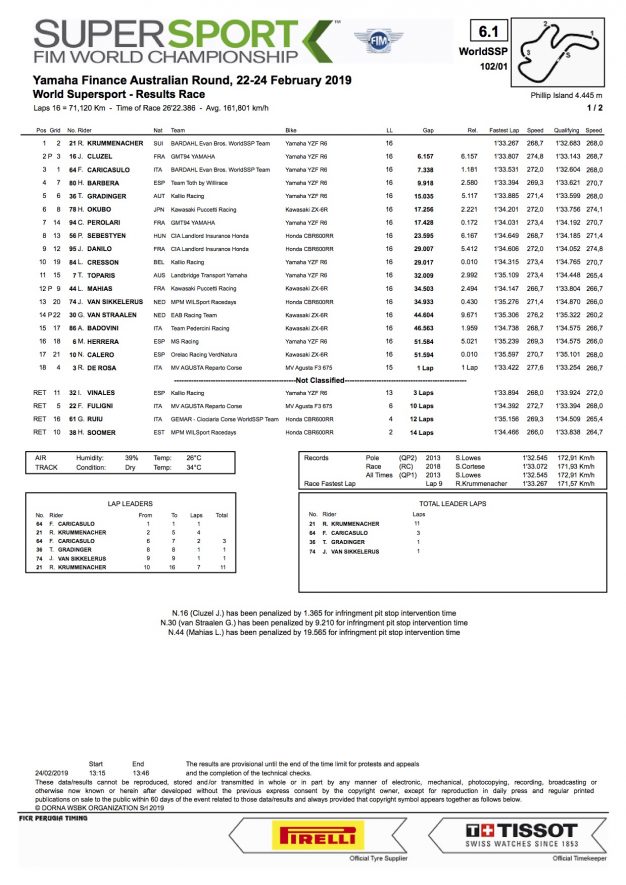