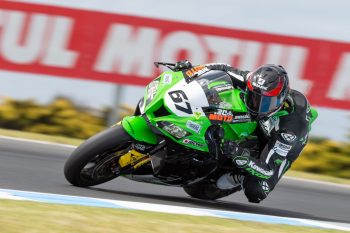 The opening round of the 2019 Australian Superbike Championship (ASBK) descended upon Phillip Island this weekend, alongside the World Superbike Championship, where BC Performance Kawasaki Racing Team ZX10-R Superbike rider Bryan Staring opened his season campaign with fifth overall in the tightly contested premier class, while Callum O’Brien became the first racer to put the new Kawasaki Ninja 400 on the SuperSport 300 podium.

It was a mixed weekend for new BC Performance Kawasaki recruit Callum O’Brien, with a 9-3-DNF scorecard for tenth overall for the weekend. Results on paper don’t tell the true story, with O’Brien constantly battling within the lead group of the always fierce small capacity field of 34 racers, equipped with Dunlop Sportmax Q3+ multi-tread tyres offering excellent grip, and manoeuvrability thanks to Dunlop’s IRP technology.

With a 3-4-8 race result from a qualifying position of 10th, Staring had to work hard each race to move forward in a 34-rider field where the fastest-ever Australian Superbike lap was set. Consistently the fastest in the final stages of every race, Dunlop proved once again to give great confidence, strong grip and excellent tyre life.

Bryan Staring: “If I was further up the grid after qualifying, I’m confident that I’d have a better result than fifth overall. The class is really competitive with plenty of riders capable of winning races, and I’m confident that I’m one of them. My lap times in the last half of each race are consistently the strongest, and the feeling on the bike is really good. I just need to be in a better position from the start to best take advantage of the strengths we have.”

Dunlop Motorsport Manager, Robbie Bugden: “It’s always exciting to go racing again, and 2019 is shaping up to be an interesting year with new bikes, some new faces, and what appears to be a large contingent of very fast superbike riders. With Bryan starting from 10th on the grid, it was difficult for him to really take advantage of the strength we have in the later stages of the race, when other riders are struggling for grip. He rode really well all weekend, and it was great to see Dunlop on the podium in the first race of the year. I look forward to seeing it more throughout the year.”

Wakefield Park Raceway hosts Round 2 of the seven round ASBK championship on March 22-24 where the Dunlop team will once again be on the ground supporting racers, offering technical advice and tyre fitting.