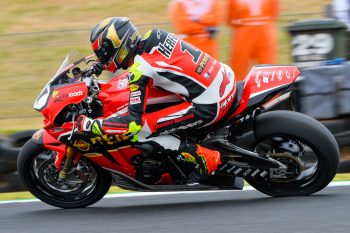 While declaring he makes no excuses for winding up an uncharacteristic sixth overall, reigning champion Troy Herfoss admits his WorldSBK wildcard appearance at Phillip Island clouded his thoughts on set-up with the Honda CBR1000RR SP in the Motul Pirelli Australian Superbike Championship (ASBK).

Piloting a vastly different CBR1000RR SP in WorldSBK trim that was prepared at the last minute, Herfoss experienced difficulties adapting to the upgraded package, ultimately forced to retire from races one and two, while finishing the all-new Superpole race on Sunday morning in 16th position.

In the ASBK, the number one plated Penrite Honda Racing rider lodged a 9-6-7 scorecard for sixth overall, expressing relief to exit the weekend still in the hunt after challenging six races across the two championships.

“I just want make sure everything is clear – I don’t make any excuses for how my Australian Superbike weekend went,” Herfoss told CycleOnline.com.au. “I was definitely leaving the track each day thinking about the ASBK bike and my thoughts were a little bit clouded because the other bike was so different.

“We definitely didn’t get as much production out of this weekend as we would’ve hoped with bike set-up. But hey, I just want to make it clear that everyone in ASBK was riding super strong and the pace was high – maybe on my best day, I may still not have been able to win today.

“I’m definitely not making any excuses, I’m just thankful I came away with three solid races and three races where I improved each time. As far as I’m concerned, I’m in the hunt as always.”

Despite the result not satisfying his expectations, the Gold Coast-based rider is optimistic in the feeling he was able to achieve, particularly after experiencing initial difficulties in set-up at the Island.

“It was a very trying weekend, but I feel really good about how it ended,” he added. “In race three, Wayne [Maxwell] and I were able to close the gap to the leaders. My body felt good, I didn’t have the outright pace, but I was able to repeat my best lap-time almost every lap to hang onto the back of that bunch.

“It’s a long championship with seven rounds and I feel really good on the bike. There were some things happening there in the last race that make me feel good heading onto the next round, so we will take confidence from that and move onto Wakefield Park – I’ve had a lot of good results there in the past!”

The ASBK will now head to Wakefield Park in New South Wales on 22-24 March, a venue where Herfoss has been triumphant for the past three seasons.