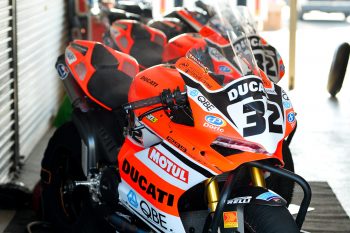 Three-time Superbike world champion Bayliss underwent surgery last week after crashing out of Phillip Island’s opening round of the 2019 Motul Pirelli Australian Superbike Championship (ASBK), prompting the team to call in Jones for scheduled testing at the round two venue.

Making a surprise entry at Phillip Island’s opener aboard Kawasaki machinery, Jones wound up fourth overall after racing to second in the final outing, challenging for victory right to the flag.

“Troy injured himself the other weekend at Phillip Island, and I had a fairly successful weekend there on the K&R Hydraulics and Maverick Race Developments Kawasaki ZX-10RR,” Jones explained to CycleOnline.com.au.

“Basically Troy and Ben asked me if I wanted to come along and do some testing for them as bit of a favour to help them out to get the bike up to speed at Wakefield Park. I felt really, really good. I enjoyed getting back on the v-twin and riding that style of bike – it’s quite different to the Kawasaki, but I adapted quite quickly and felt very comfortable on the bike.”

The Queenslander hasn’t ruled out a possible return to the outfit as he’s yet to lock down his future after racing internationally for the past two seasons, registering his intentions to race round two of ASBK aboard the privateer Kawasaki.

“I think there’s a possibility, but at this stage it’s just a focus on the test,” he added. “I haven’t really spoken to the guys about anything more there, but I’m sure they were happy with how the couple of days went – I know I certainly was – so who knows what will happen.

“At this stage my mindset is to be on the grid at Wakefield Park for round two, my plans are too uncertain for overseas, so it’s a bit of a back-up plan. We’ll see what happens after that.”

Round two of the ASBK is scheduled for 22-24 March at Wakefield Park in New South Wales.