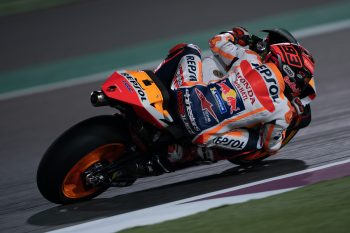 Reigning champion Marc Marquez has declared he’s almost at 100 percent for this weekend opening round of the 2019 MotoGP World Championship at Losail International Circuit in Qatar.

The Repsol Honda ace underwent surgery on his shoulder last year after wrapping up his fifth premier class crown, narrowly recovering in time for the official test at Sepang in February.

With two tests and six days of riding under his belt on the 2019-spec RC213V, Marquez is adamant more improvements need to be made, however recently sampling the machine in Qatar has offered promise in the lead up to the weekend.

“This winter has been different due to the surgery, I worked hard with five hours of physio per day with only one goal: arrive in the best conditions in the first race of the year,” Marquez explained. “At the Qatar test I felt much better than at the Malaysia test and now I can say that I arrive almost 100 percent.

“Honda has done a lot to improve the bike and in the test we were feeling strong, especially for a circuit which usually isn’t the best for us, but we have to keep improving.

“Qatar is always a special round, not just because it is the first of the year but also because of the conditions. We will have to pay special attention to the temperature and consider everything before the race.”

Marquez will be joined by incoming teammate Jorge Lorenzo for the 2019 series, the fellow Spaniard coming off wrist surgery following a pre-season training incident.