Pramac Racing rider confident he could have gone quicker on second flyer. 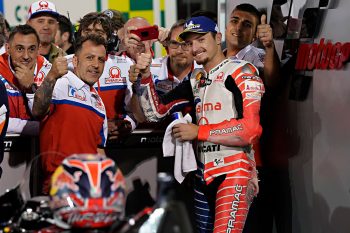 An incident on his second flying lap in qualifying cost Australia’s Jack Miller the chance of fighting for the front row in Qatar’s opening round of MotoGP 2019.

The Alma Pramac Racing rider, armed with a factory specification Ducati for this season, will start as top Independent out of fourth on the grid.

Miller jumped to second on the time-sheets with a 1m53.809s, but went down soon afterwards on the entry into turn two and denied him any hope of improving further. In the end he wound up fourth, only 0.064s from world champion Marc Marquez in P3.

“Unfortunately the crash that didn’t allow me to complete the second lap,” Miller reflected. “I’m sure I could have ended up with the front row, however I am very satisfied with what we did today – especially in the FP4 with a long run where the race pace was very positive.”

It’s been a remarkable opening weekend of the season for Miller, third fastest overall on Friday and once again displaying a front-running pace throughout Saturday’s sessions under lights at the Losail Circuit.