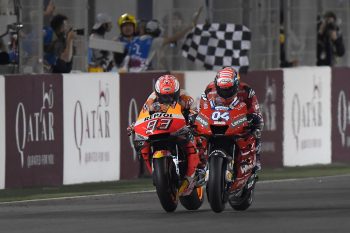 Behind that classic duel that defines a rivalry came another battle but this time of three, with Cal Crutchlow (LCR Honda Castrol) pulling out all the stops to complete the podium and fend off Alex Rins (Team Suzuki Ecstar) and a late-charging Valentino Rossi (Monster Energy Yamaha MotoGP).

It was Dovizioso who got the holeshot from pole, he and Australian Jack Miller (Alma Pramac Racing) grabbing P1 and P2 into turn one as Marquez held position just behind. Polesitter Maverick Viñales (Monster Energy Yamaha MotoGP) didn’t get the start he would have been aiming for as he dropped to sixth on lap one, with Takaaki Nakagami (LCR Honda Idemitsu) and teammate Crutchlow catapulting through to the top five.

The race then began to settle into a rhythm, with a train of riders at the front led by Dovizioso keeping a steady pace at the front. Rins was the man on the move on lap four as the Spaniard made more progress after a sharp start from P10 on the grid, the Suzuki man coming through to take the lead by lap five before the Spaniard duelled Dovizioso for the pleasure. It remained a lead group of nine following each other line astern, however, with no one breaking rank just yet.

On lap 12 the number 04 was back at the front, and the pace then turned up a notch as he and Marquez started to create a gap back to third place Danilo Petrucci (Mission Winnow Ducati), who’d made his way through the group. The pace then slowed again, however, as Dovizioso went from a 1m55.3s to a 1m56.1s to bring the top eight back to within just over a second.

With seven to go, the top eight were covered 1.2 seconds and that’s when Rossi really started to make up ground, picking off his teammate first and then Joan Mir (Team Suzuki Ecstar) to go up to P6. With three laps to go the fight for the win became a five-way scrap, with Petrucci, Viñales and Mir fading off the pacesetters.

Marquez had got the better of Dovizioso on the penultimate lap, but the Ducati struck back down the straight. Crutchlow held P3, Rins P4 and Rossi P5, menacing behind and waiting for the fireworks to begin in the lead. Pushing hard, Marquez had a slight moment with the front at turn three, before making a lunge up the inside of Dovi at Turn 10. He couldn’t keep it though as the Desmosedici was able to cut back up the inside on the exit, setting up another classic grandstand finish.

It looked like a carbon copy of 12 months ago at the final corner, but it was the same edge-of-the-seat heart-in-your-mouth moment as Marquez dove through on the inside, sitting up Dovi but running wide as he couldn’t quite get it stopped in time. From there it was another classic point and shoot contest to the line as both gunned it on the exit, but Dovizioso couldn’t be caught and made it out ahead.

It was closer than before though, with an infinitesimal 0.023s separating the two as the flag waved. Behind, Crutchlow kept his cool to take a remarkable podium on his first race back since his huge Australian GP crash, with Rins a valiant P4 and Rossi again proving you should never count ‘The Doctor’ out. P5 from P14 on the grid was another impressive race day showing from the nine-time World Champion.

Petrucci would have to settle for P6 on his maiden factory Ducati ride, 2.320s behind his teammate in the end, with polesitter Vinales crossing the line 0.161s back from ‘Petrux’, in P7. Mir produced a fantastic rookie ride to finish just over five seconds off the race win in P8, with the Spaniard beating ninth place Nakagami and tenth place Aleix Espargaro (Aprilia Racing Team Gresini) – and just 9.636s covering the top 10 in Qatar.

So who was the ride of the day? Far from the podium in the end and not scoring any points on his debut, an argument could be made for Fabio Quartararo (Petronas Yamaha SRT) regardless. The rookie was forced into a pitlane start after issues on the grid ahead of the warm up lap, and set about unleashing some almighty pace and nerves of steel for a first ever premier class appearance.

Fastest laps flowed from the Frenchman and he was soon into point-scoring contention, although sadly, it wouldn’t last. Too much too early in a bid to catch the group ahead saw Quartararo fade back to P16 by the flag – but only eight tenths off Zarco. Fellow debutant Miguel Oliveira (Red Bull KTM Tech 3) also impressed and, for some time, was top KTM, before fading slightly, a fate that also befell Mir further forward as they all aim to gain more full-length race experience.

Final rookie Francesco Bagnaia (Alma Pramac Racing) suffered a DNF, with more to come from him in Argentina for sure, and his more veteran teammate Miller also suffered some bad luck. The Australian fell victim to some problem with his machine that saw him drop from podium contention to suddenly outside the top ten, then retiring before the end of the race.

Flexbox HP 40’s Lorenzo Baldassarri had to fight off huge last lap pressure from the returning Tom Luthi (Dynavolt Intact GP) to take Moto2 victory in Qatar, with the duel going down to the line. The Italian led from lap two but had to withstand some serious pressure in the final sector of the last lap to hold off a swarming Luthi, eventually taking the chequered flag just 0.026 clear of the Swiss rider. Dynavolt Intact GP’s Marcel Schrotter completed the podium from pole.

Australia’s Remy Gardner (ONEXOX TKKR SAG Racing Team) was an impressive fourth – a career-best finish – after holding down third for a portion of the final lap, while the top five was rounded out by Flexbox HP 40’s Augusto Fernandez.

Kaito Toba (Honda Team Asia) became the first Japanese winner in Moto3 and the first in the lightweight class since Tomoyoshi Koyama took victory in the 125cc race at the 2007 Catalan GP after a stunning ride.

He’s also the first Idemitsu Asia Talent Cup xhampion to become a grand prix winner after duelling it out in style to the line against Lorenzo Dalla Porta (Leopard Racing), the man who just lost out, and polesitter Aron Canet (Sterilgarda Max Racing Team), who completed the podium. The top five was completed by Marcos Ramirez (Leopard Racing) and Celestino Vietti (SKY Racing Team VR46).

The MotoGP World Championship now heads to Argentina on 31 March for round two of the series. 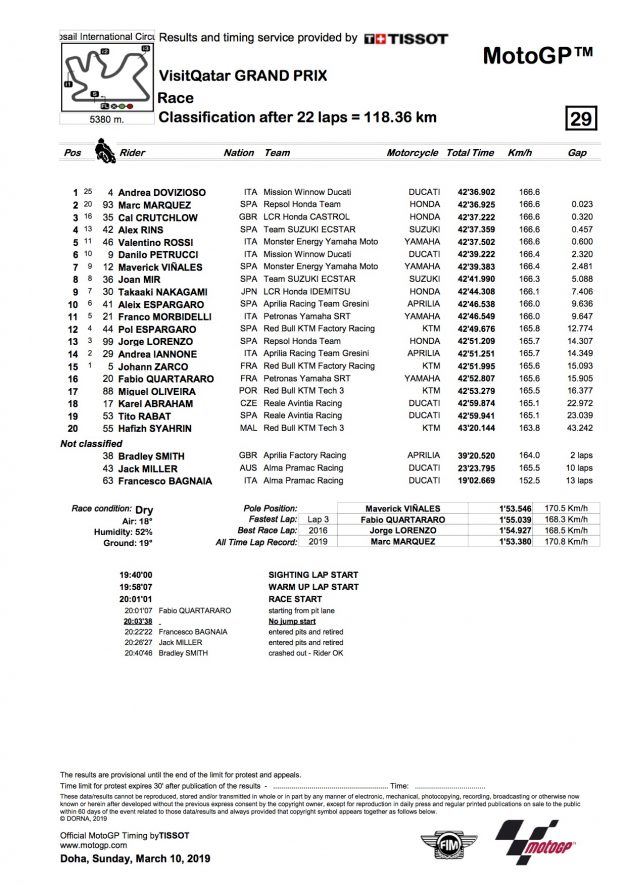 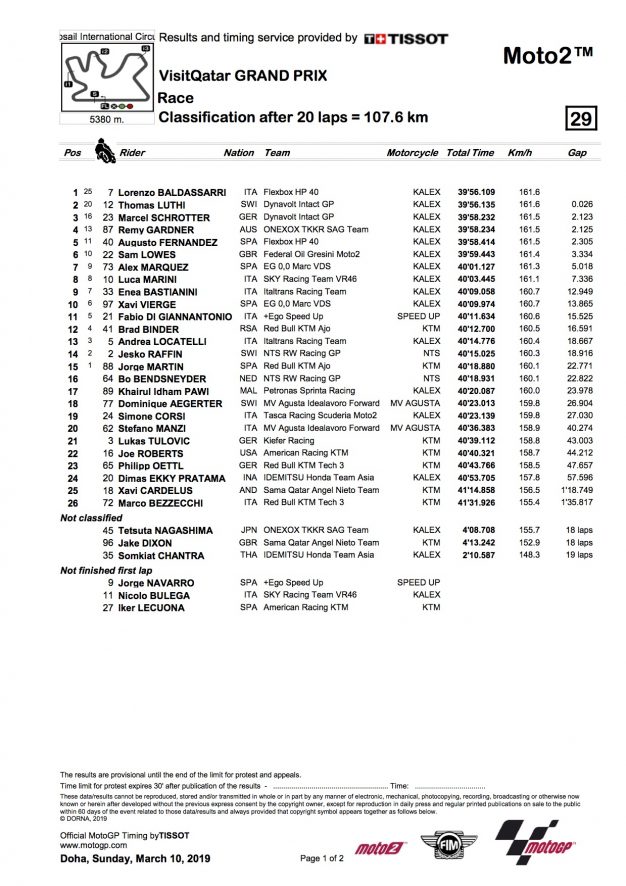 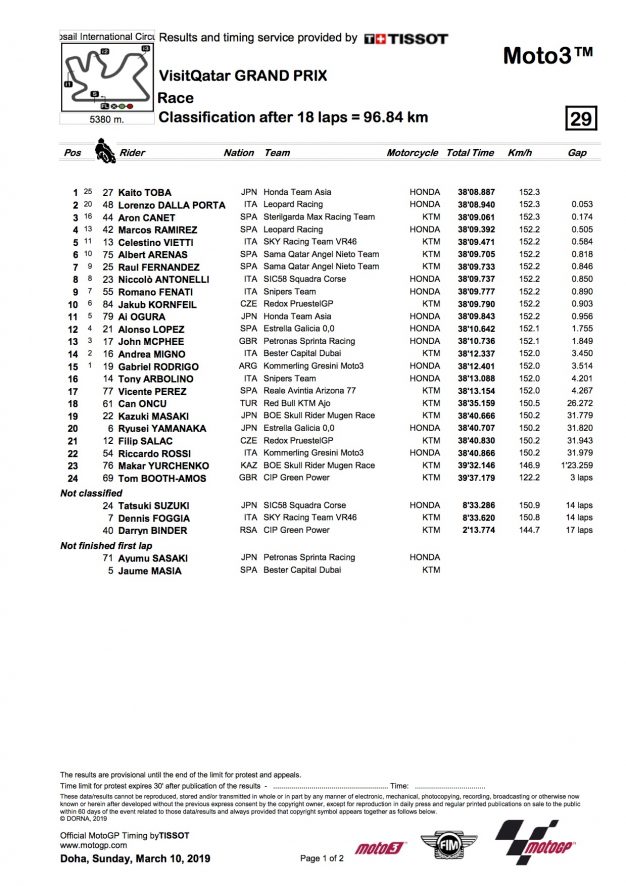