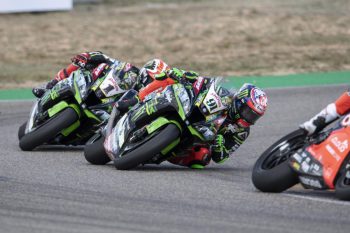 British talent Leon Haslam is feeling upbeat after exiting Aragon’s third round of the 2019 Motul FIM Superbike World Championship (WorldSBK) with a string of positive improvements in the final encounter.

The Kawasaki Racing Team newcomer experienced a slump in results during race one and the Superpole outing, where he lodged a 9-7 scorecard, however he rebounded in race two, finishing a respectable fourth.

“Starting from the fourth row was not ideal in the first two races so we used the sprint race to get back into it,” Haslam commented. “The team has done mega-well from really struggling on Saturday morning to being able to battle for second place for Johnny – what a turnaround.

“I am really happy about what we have done here and I feel quite positive. In the sprint race I did not get the best of starts but it got me a better grid position for the final race. We made some steps in being able to pass people in the last race as well.”