Staring called in for double duties at The Bend

ASBK contender to fill-in for Warokorn at Kawasaki Thailand Racing Team in ARRC. 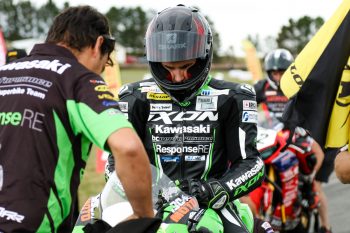 Western Australian Bryan Staring will take on double duties at The Bend Motorsport Park’s third round of the 2019 Motul Pirelli Australian Superbike Championship (ASBK) after being called in to replace Thitipong Warokorn at Kawasaki Thailand Racing Team in the Asia Road Racing Championship (ARRC) that will run alongside the domestic series in South Australia.

Warokorn, who leads the ASB1000 standings, sustained a back injury while undertaking a wildcard opportunity in Thailand’s second round of the 2019 Motul FIM Superbike World Championship (WorldSBK).

ASBK regular Staring will fill-in the talented Thai contender in a one-off appearance in the Asian series, which will see him double his track time at The Bend as he continues his role with Kawasaki BCperformance.

“It was all a bit of a surprise to me, because I’d like to think I keep an eye on what’s happening in the ARRC, but I wasn’t aware that Thitipong was injured in the WorldSBK race,” Staring explained to CycleOnline.com.au. “He was pretty successful – he was leading after the opening round in Malaysia.

“I was surprised when I was contacted about the event from the team, but I’m pretty keen to have a go at it. It’s all come through the correct channels – from Kawasaki Thailand, to Kawasaki Japan, and back to Kawasaki Australia and through my team manager and through to me. In the end, their rider is unfortunately injured, they needed a replacement, and I’m happy to do it as a one-off.

“I’m under no illusion that it’s going be a very physically demanding weekend with double race duties. We’ll see – I know my condition is good, and I’m confident I can do both tasks well, otherwise I wouldn’t take it on. I think at the beginning of the weekend, the extra track time will be an advantage, but through the course of the weekend will be more difficult having done so many laps.”