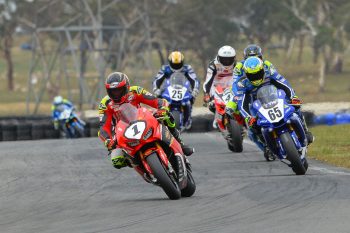 Penrite Honda Racing’s Troy Herfoss will enter The Bend Motorsport Park’s third round of the 2019 Australian Superbike Championship (ASBK) with momentum on his side, looking to repeat his victory achieved at the South Australian venue one year ago.

Herfoss was the first-ever ASBK round winner at The Bend last season in his way to the championship and, following an inspiring test at the circuit earlier this month, the 32-year-old will take confidence into the race weekend. With three races scheduled, it ranks as a pivotal round in terms of the title race.

“The Bend will be a good weekend and it will be interesting to ride in conjunction with the Asia Road Racing Championship series again,” Herfoss commented. “A test we completed there recently went well and last year was a strong result for us, so it’s a circuit that we seem to do well at. I really love that track – the blind, connected corners make it quite technical.

“It’s going to be critical to be strong over race distance because of tyre wear, so I am looking forward to seeing where we’re at. With three races and extra points up for grabs it ends up being a pretty important weekend in the championship and I think after round three we will have a lot better idea who will be our main rivals for the title.”

Herfoss currently sits second in the ASBK point-standings after his commanding double win at Wakefield Park in March, boosting him to within five points of the championship lead aboard the factory-backed CBR1000RR SP Fireblade.

Second of the Penrite Honda Racing entries, Mark Chiodo posted a top 10 result in South Australia and he too will be carrying high hopes into The Bend. Grand prix circuits are his favoured layout, which should serve him well across the round.

“I didn’t test at The Bend coming into round three, but we went there in December so I have ridden the Honda there,” Chiodo said. “I’ve ridden at a couple of different tracks since Wakefield Park though and hope to move forward. I tend to like the GP-style tracks where they’re faster and more flowing, so I’m excited for the weekend.

“Last year I finished in the top 10 and didn’t go too bad, especially as the weekend progressed, so I just need to make sure I make the most of the tyres this weekend. If I can start off the weekend decent, then it should be a good round. To have three races should also be a benefit for me to gain experience as well.”

Practice will open on Thursday with a single 60-minute session, followed by a pair of 30-minute practices on Friday. Saturday includes split qualifying and the opening 10-lap race of the weekend before two more 10-lap encounters will be contested on Sunday. Visit www.asbk.com.au for further information on the series.