Cube Racing continues to impress at The Bend 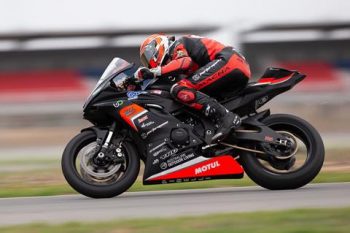 The third round of the Australian Superbike Championship (ASBK) at The Bend Motorsport Park in South Australia is over, with Cube Racing Supersport racers Oli Bayliss and Avalon Biddle racing to eighth and seventh overall after three races.

Team owner, Ben Henry: “It might not look like a great weekend on paper but it was really positive for us. We keep reminding everyone of how young Oli is, because although he’s fast, he still has a lot to learn about riding the bigger bike, as well as communicating what’s happening to his team. The Bend is a complex race track with a surface that can destroy tyres quickly and requires a lot of thought, finesse and adapting to get the best result. For Oli, it didn’t quite come together the way he expected, and although he’s disappointed in his result, I’m actually happy with how he handled himself through a tough weekend on track. As for Avalon, impressed is an understatement. No testing, new bike, new track, new team and she progressed forward all weekend finishing with a fifth place in race three and matching some sector times with Tommy (Toparis). Let’s just say we’re looking forward to seeing what she can do at Morgan Park with a little more testing.”

Oli Bayliss: “That definitely wasn’t the weekend I expected to have. It just didn’t come together for me really. The guys worked hard all weekend to give me the best bike possible, and when I did feel good on track, I came together with riders on the first lap pushing me back in the pack. I head home still in fourth, so it wasn’t all bad.”

Avalon Biddle: “What a great weekend! I was initially unsure about racing this round since I only just wrapped up the NZ Supersport Championship and missed testing, but it’s turned out to be a great decision. I’m incredibly happy with the bike, the team and the way everyone works together to help each other go faster. Both Mike Jones and Cru Halliday spent some time with me to help get up to speed faster with the circuit while Jeff (Dillon) and the entire Cube Racing team helped get the bike setup right. I moved forward in both times and race position every time I was on-track. I head back to New Zealand now to keep training before coming back and testing. I can’t wait to go racing again.”

With two months until round four in Morgan Park, Cube Racing now takes time to review the year so far, implement changes if needed and prepare for the final four rounds of the 2019 ASBK season.

Stay up-to-date with the team throughout the year and over the race weekend via our social media:

For more information on the Australian Superbike Championship head to www.asbk.com.au