Points leader records first losses of the season in Italy. 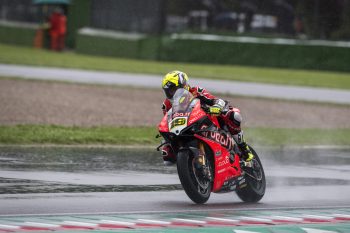 The Aruba.it Racing – Ducati rookie, who was undefeated up until the weekend, accepted his first losses of the season, scoring 2-3 finishes in race one and the Superpole outing.

“Unfortunately the bad weather affected the second race, and it was raining really hard,” Bautista explained. “The track conditions were dangerous, with a lot of water in some parts and streams crossing the track. It was too risky for the riders and it was the right decision to cancel the race.

“We feel really bad about that because we know that there are a lot of Superbike fans here, but rider safety is the most important aspect. Having the support of all the Ducatisti is incredible and even though I didn’t win a race, it was one of the best weekends in my entire career because I really felt their support. For this reason, I feel a bit sorry for them, but I think they will understand the situation.”