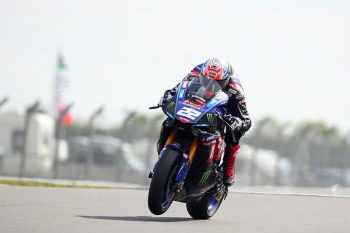 The weekend’s triple-header saw O’Halloran notch up his third DNF of the season after crashing out of the final encounter, however he was still able to record 5-7 results in the opening two outings.

The number 22 made a number of set-up changes heading into the final race, and despite the crash, he’s optimistic with the feeling he was able to discover before going down.

“It’s not been the easiest of weekends,” O’Halloran stated. “We’ve been chasing something all weekend, made some changes for Saturday and improved the feeling but in the first two races I struggled at the start. For the third race we made some more changes but I was quite far back on the grid which made things difficult.

“The bike felt much better, I had a lot more confidence on the brakes and I felt like I could ride the bike how I wanted to again. I’m really happy with that and I’ll take that away from this race as obviously a crash isn’t ideal. It’s our third DNF of the year, which isn’t what we want.

“I want to go fast and be at the front, I don’t want to be messing around in seventh or eighth so we have to keep pushing and looking for the feeling we are after. Once we nail that on the head I’m confident we’ll be at the front.”

O’Halloran is ranked 10th in the championship standings as the series returns to action on 14-16 June at Brands Hatch.