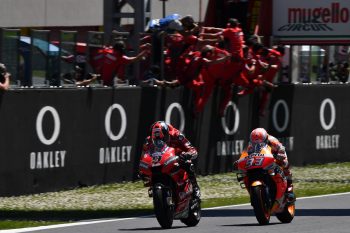 It was Marquez who took the holeshot from pole, but the headline-grabber as the lights went out was Dovizioso as the Italian shot off the line from P9 with a perfect start and was into a stunning third – behind Cal Crutchlow (LCR Honda Castrol) – into turn one.

Petrucci dropped to fifth, the two Petronas Yamaha SRTs of Fabio Quartararo and Franco Morbidelli also lost out, and Jack Miller (Pramac Racing) moved up. Alex Rins (Team Suzuki Ecstar) was also on the move, threading his way into the fight at the front after starting in 13th. At the front though, it only took one lap for Dovizioso and Petrucci to tag onto the back of Marquez as they swooped through on Crutchlow in quick succession.

It remained a train of riders at the front, with nine within two seconds, but home eyes were also trained elsewhere as Valentino Rossi (Monster Energy Yamaha MotoGP) ran on, as did rookie Joan Mir (Team Suzuki Ecstar), and the two were forced into a quick trip across the gravel – rejoining at the back. The race was on and Mir would recover for points, but it ended early for the ‘Doctor’ as he then slid out of contention at turn nine – a tough end to a tough weekend.

Back at the front though, the fight was feisty and slowly but surely, a front quintet of Petrucci, Marquez, Dovizioso, Miller and Rins were able to pull away. Drama then hit Miller though as he suddenly crashed out – not long after teammate Francesco Bagnaia had done the same – and then there were four.

That was how it would remain, with Takaaki Nakagami (LCR Honda Idemitsu) the next man down the road but the Japanese rider unable to close in. With five laps to go there was nothing between the foursome, and despite the chopping and changing, it was Petrucci who’d been at the front since lap 11 to assert some authority on his charge at the win – with ‘DesmoDovi’ then taking over from Marquez in second.

Sure enough, the number 04 struck against his teammate at turn one with four to go, but he couldn’t pull away – and Petrucci soon hit back. He held on in the lead next time around into San Donato too, and again, until the high speed chess game arrived at the final lap.

Dovizioso slipstreamed past his teammate on the final full speed dash down the straight, but Marquez did one better and managed to take both, the Honda man ahead into turn one for the final time. But he headed a little wide and Dovizioso took the inside line – but he was wide as well. Enter Petrucci, with the number nine spotting the gap and slicing past both as Dovi had to then sit up and cede second to Marquez.

The task for ‘Petrux’ was then easier said than done – defend the lead of his first home grand prix in factory colours from the most notorious last lap lunger. But that’s what he did. He needed the lap of his life and that’s exactly what he delivered, just out of reach of Marquez and emerging from the final corner still ahead as Dovi tried to find a way past Marquez.

But there wasn’t one, and the turn one shuffle would prove decisive as Petrucci escaped Marquez who escaped Dovi on the run to the line – and the number 04 Ducati even came under threat from Rins into the final corner.

But the Suzuki man couldn’t stick with the Borgo Panigale power, and one of the races of the season saw Petrucci make some history, Marquez gaining a little ground in the championship and Dovizioso forced to settle for third on his 300th grand prix start. For all his help and support, however, Petrucci did dedicate the win to his compatriot.

Behind Rins’ stellar ride to fourth, Nakagami pulled out an ace on race day to take his best ever premier class finish as he completed the top five – and as top Independent Team rider to boot. Maverick Vinales (Monster Energy Yamaha MotoGP) gained some ground late on to claim sixth, with wildcard Michele Pirro (Mission Winnow Ducati) a late mover as well as he came home seventh.

Fabio Quartararo, who lost out after his stunning qualifying session, crossed the line tenth but once again took home a good little haul of points to keep his supreme run in the fight for Rookie of the Year, with Aleix Espargaro (Aprilia Racing Team Gresini) taking P11 on Noale factory home turf. Mir recovered to 12th and got past Jorge Lorenzo (Repsol Honda Team), with Karel Abraham (Reale Avintia Racing) and Andrea Iannone (Aprilia Racing Team Gresini) completing the points.

Alex Marquez (EG 0,0 Marc VDS) took back-to-back wins in the Moto2 class for the first time in Mugello, with the Spaniard repeating his Le Mans pace to pull away into clear air in the lead and leave Italy only two points off the championship lead.

Polesitter Tony Arbolino (VNE Snipers) pitched it to perfection to pip compatriot Lorenzo Dalla Porta (Leopard Racing) to the line in the Moto3 category, winning his first grand prix by just 0.02s9 in a classic Moto3 melee. Behind the home duo, Jaume Masia (Bester Capital Dubai) left it late to make his charge for the front, completing the podium in third and still within hundredths of the win. The MotoGP World Championship now heads to Catalunya in Spain on 16 June. 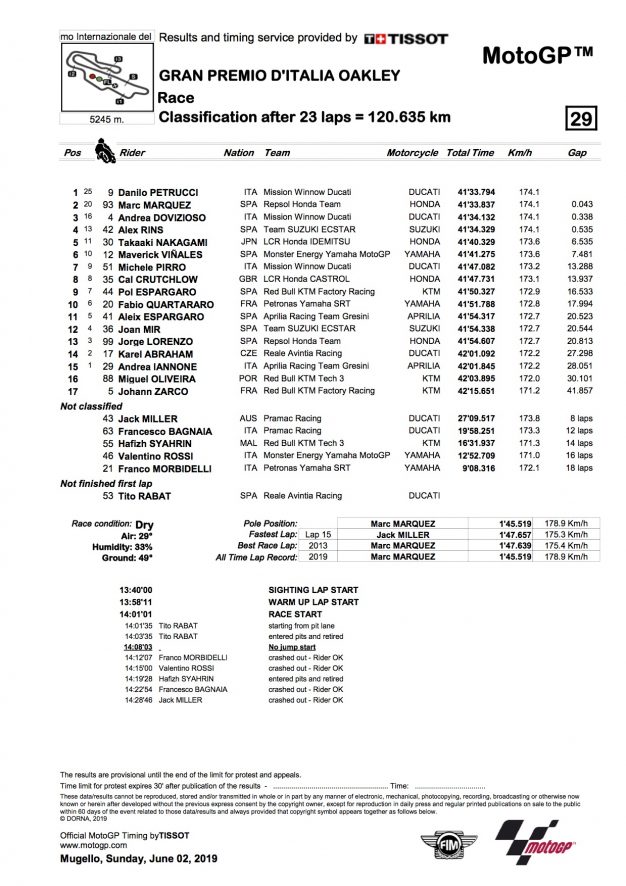 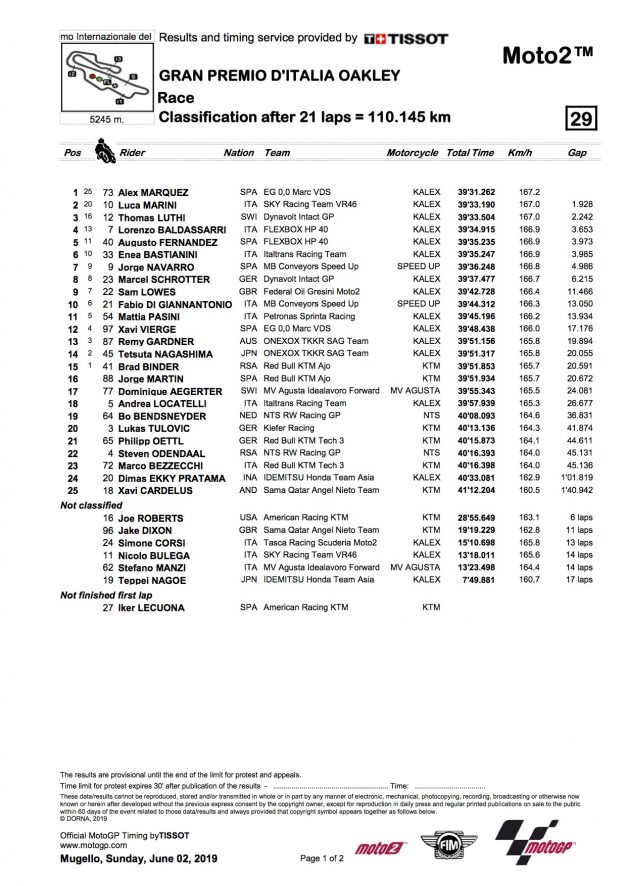 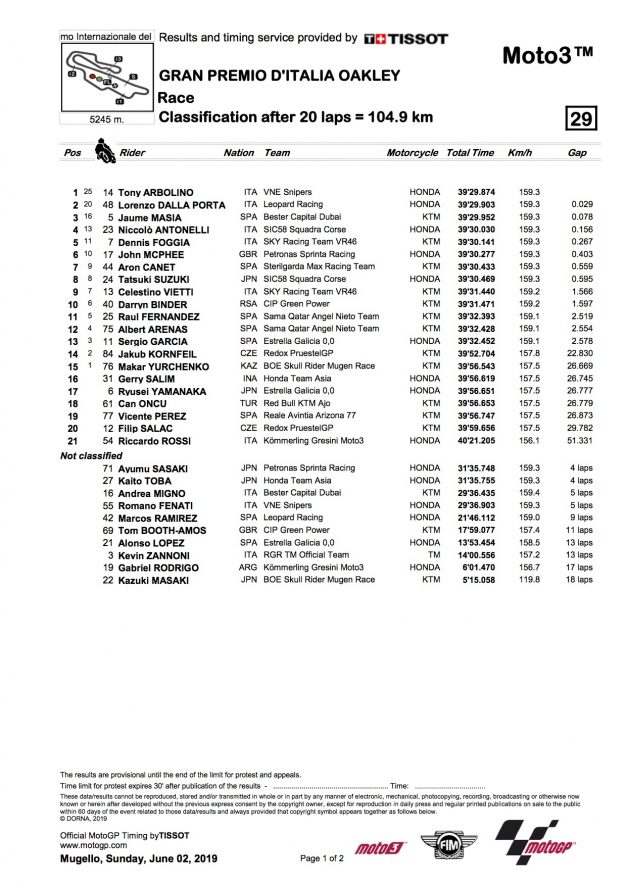