Bautista hopeful he’ll be ‘back to normal’ at Jerez

Factory Ducati pilot targeting victory at second home round of the season. 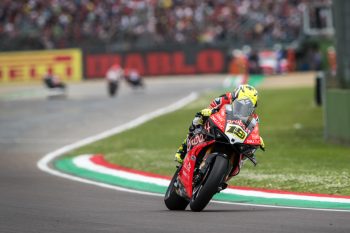 Points leader Alvaro Bautista is hoping to be back to his winning ways at Jerez’s sixth round of the 2019 Motul FIM Superbike World Championship (WorldSBK) this weekend after recording his first losses of the season at Imola’s previous round.

The Aruba.it Racing – Ducati pilot, who went undefeated in the first four rounds of the world championship, is anticipating strong support from the Spanish crowd as he takes part in his second home race of the season.

“After the last round at Imola, the next race on the calendar is at Jerez, a track I know very well, and so I hope for me that everything will be back to normal,” Bautista stated. “Last week we tested for two days at Misano with a good feeling even though the conditions weren’t great.

“It was an important and positive test for a series of reasons, also for the future, and we did back-to-back tests with various components on the bike rather than aiming for a fast time. For me Jerez is another home race, so we hope to enjoy ourselves here and put on a good show for the increasingly numerous Spanish crowd.”