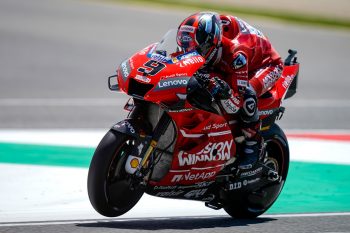 Mission Winnow Ducati ace Danilo Petrucci says a weight has been lifted since earning his first MotoGP victory at Mugello two weeks ago as round seven of the world championship looms this weekend at Catalunya in Spain.

The Italian contender is adamant his goals haven’t changed since the all-important triumph, and still anticipates reigning champion Marc Marquez (Repsol Honda) to be the toughest competitor in the weekend’s Spanish round.

“I’m really keen to get back to racing after taking my first win at Mugello,” Petrucci stated. “It was a very important result for me, and I’ve been feeling lighter ever since. Our goals, however, don’t change and I expect Márquez to be a strong rival in Montmelo as well.

“We need to pick it up from where we left it in Mugello, but it won’t be easy because the track is difficult to interpret when temperatures are particularly high. I expect another battle, but we’re more conscious of our potential now so the target, as in the past few races, is the podium.”