Spaniard's points advantage cut in more than half at the seventh round. 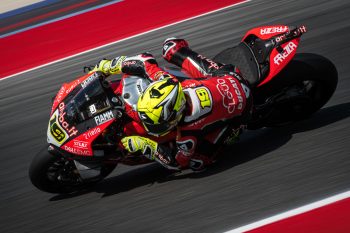 Alvaro Bautista’s advantage in the 2019 Motul FIM Superbike World Championship (WorldSBK) has been reduced to just 16 points after a crash in race two at Misano saw him suffer a significant points hit.

The Aruba.it Racing – Ducati rider held a 41-point gap over reigning champion Jonathan Rea (Kawasaki Racing Team) heading into the weekend, although his P14 finish in the final encounter after recovering from a crash, combined with Rea’s victory, saw that margin cut in more than half.

“I’m happy but at the same time very angry with myself about the results of today’s two races,” Bautista stated. “It went well in the morning’s Superpole race because we were on really top form. After a good start I immediately took the lead, and set the pace right down to the chequered flag.

“In race two it was very hot and the track didn’t have as much grip. On lap two, I didn’t do anything strange at turn four, but just lost the front and crashed. Pity because our potential was obviously to fight for the win.

“Maybe the error came about because I was too confident after the win in the Superpole race, but in any case we must have a good look at the data because I’ve made two similar mistakes in the last two races, and that’s not good. We have to understand why so as not to repeat the same mistakes and lose more points.”

The WorldSBK series returns to action on 5-7 July at Donington Park in the United Kingdom.