Queenslander to remain aboard factory specification bike next season. 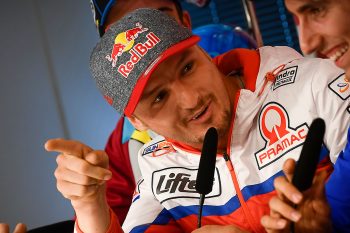 Australia’s Jack Miller is now near certain to remain with Pramac Ducati in the 2020 MotoGP World Championship after agreeing to a single-year contract extension with the factory-supported satellite organisation.

Miller, 24, will be armed with a factory specification GP20 alongside current teammate Francesco Bagnaia, who is also contracted to receive current bikes from the Italian manufacturer.

“Pretty much everything is done except putting pen to paper,” Miller commented at Assen. “It looks like I’m staying here – I say that with a smile on my face because I’m happy. I’m really chuffed to be able to stay here for another year with the official bike.

“I think it’s going to be awesome news for Pramac as well. It looks like we should be having two factory bikes here, so it’s amazing news for the team and for both of us riders… we’re just waiting to iron out the rest of the contract details.”

Currently ranked sixth in the MotoGP standings, next year remarkably marks Miller’s sixth term in grand prix racing’s premier class after initially transferring directly from Moto3 in 2015 with Marc VDS Honda. His lone win came at the Dutch TT back in 2016.