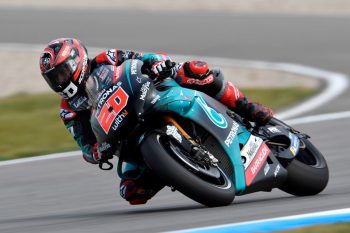 MotoGP rookie Fabio Quartararo saw his campaign for a maiden victory hindered by an arm problem at the Dutch grand prix on Sunday, the Frenchman ultimately settling for a podium finish after struggling to hold on in the demanding 26-lap outing.

The Petronas Yamaha SRT rider recently underwent arm pump surgery, however still in the recovery phase, he evidently encountered issues as he led the opening 12 laps, forced to back down after suffering severe shaking at speed and accept a P3 result.

Starting on pole and sitting on the podium for the second consecutive time, along with controlling the race until almost halfway, the youthful contender is still joyous with his performance.

“It’s been a great weekend, although the race was very tough,” Quartararo explained. “Leading the race was one of the best moments of my life. When I was a kid I watched these races, and today I managed to lead one. When I got overtaken for the lead, I knew I couldn’t do anything to respond because of my arm problems.

“The chasing pack was further behind, so I chose to manage the distance and ensure I placed on the podium. My arm bothered me a lot because there were several bumps and a lot of wind, which made the bike move around a lot.

“We have taken another podium, and yesterday I got on pole, so I couldn’t be happier. The goal in Qatar was to get into the top ten frequently this season, but little by little we have been raising our targets. I’m looking forward to Germany.”

Qaurtararo has elevated himself to sixth in the standings as the MotoGP World Championship returns this weekend at the Sachsenring in Germany.