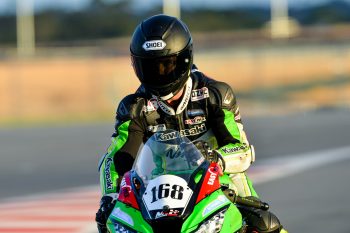 GSR Kawasaki’s Glenn Scott has confirmed he’s sustained multiple injuries in a heavy crash that brought out the red-flag in yesterday’s final practice session at Morgan Park’s fourth round of the 2019 Motul Pirelli Australian Superbike Championship.

The privateer crashed heavily on entry into turn three, sliding under the air fence and directly hitting the wall. He subsequently suffered a dislocated hip and multiple fractures in his back, although the full extent of his injuries is still to be determined.

“Not a start to round four we were hoping for,” Scott said in statement. “FP3 yesterday I crashed on entry to turn three, sliding straight under the air fence and hit [the] wall, soon after greeted by my ZX-10RR.

“I suffered a dislocated hip, wasn’t that a new pain! And unfortunately have suffered multiple fractures in my back. We find out more today about my back after an MRI scan in Brisbane. Hoping for good news and short recovery times. Will keep you all posted.”

The New South Welshman was critical of track safety at the Morgan Park venue, believing he’d back on track today for qualifying if the circuit was ‘fit for national level racing’.

“These are the risks we take riding these unsafe circuits,” he added. “Our passion to ride is so great when we roll into a circuit like Morgan Park you can see it is not fit for a national level of racing but we ignore the dangerous sections and go anyway.

“ASBK and MA need to step up and change this! If that wall wasn’t so close on the outside of turn turn, I’d be throwing a new set of fairings on my bike, dusting my leathers off and heading out for qualifying today.”