Rins crashes out of podium contention in Germany 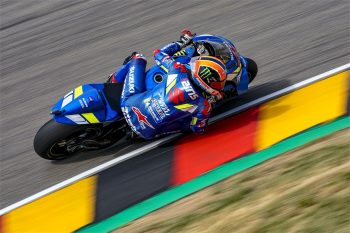 Team Suzuki Ecstar’s Alex Rins crashed out of podium contention at the weekend’s ninth round of the 2019 MotoGP World Championship in Germany, marking his second consecutive DNF.

The youthful Spaniard quickly moved into second position, however with 11 laps to spare, he lost front-end on a high-speed right hand turn, forcing him out the race while being lucky escape without injury.

“I lost a podium today,” Rins admitted. “My feeling with the bike was really nice and I tried to get into second place as soon as possible because I felt that my rhythm was strong. Unfortunately, I lost the front on a fast right hander, I entered into it just a couple of kilometres per hour faster than usual, and that’s why I crashed.

“It’s a shame because it’s my second DNF in a row, but I still feel positive because my pace has been good recently and I know I can get good results again when we come back after the break.”

Rins has now been demoted to fourth in the standings as the series heads into an extended European summer break.