Razgatlioglu ‘ruined both of my races’ declares injured Bautista 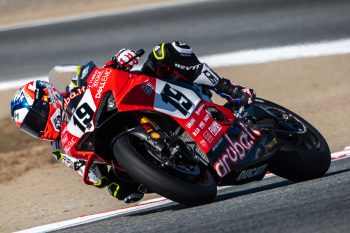 Former points leader Alvaro Bautista has placed the blame on Toprak Razgatlioglu for a Superpole race clash that resulted in the Spaniard injuring his left shoulder, forcing him to retire from both outings on Sunday at Laguna Seca’s ninth round of the 2019 Motul FIM Superbike World Championship.

Bautista, who finished 17th in race one after recovering from a crash, tagged the rear wheel of the Turkish Puccetti Racing rider into turn one, subsequently ruling him out of the race while prompting a visit to the medical centre. He attempted to complete race two, although pulled in due to severe pain,

The Aruba.it Racing – Ducati ace will undergo further medical examinations on his shoulder upon return to Spain this week, where the extent of the injury and the appropriate recovery will be determined.

“I really feel bad about what happened today,” Bautista explained. “At turn one in the Superpole race, Razgatlioglu completely closed my line and I couldn’t do anything to prevent his rear wheel from hitting my front. His move ruined both of my races today because I injured my left shoulder in the crash.

“I was taken to the medical centre and after checks, I was given the okay by the doctors to try and take part in race two, seeing as the X-ray showed that nothing was broken. Unfortunately, after just one lap I realised that the pain was too much for me to ride because as I didn’t have any strength in my left arm I wasn’t able to brake in the left-handers, and for this reason I came into the pits.

“I’m very sorry because we are working really well and always find the way to go fast, but in any case we’re going through a really difficult time at the moment. I’m sure that if we continue to work in this way, we’ll come back stronger than ever and with even more desire to win.

“As soon as I get back home, I’ll have more detailed checks done on my shoulder ligaments, but luckily two months’ break before the next race will surely allow me to fully recover.”

The 34-year-old dominated the opening rounds of the championship, building a points lead of 60 at one stage, although following a series of recent crashes, he’s now ranked second in the standings, 81 points behind four-time defending champion Jonathan Rea (Kawasaki Racing Team).