Season-first victory for the Ducati pilot in America. 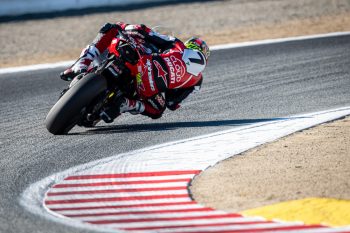 Aruba.it Racing – Ducati’s Chaz Davies has highlighted the significance of his breakthrough victory in race two at Laguna Seca’s ninth stop of the 2019 Motul FIM Superbike World Championship (WorldSBK), which marked his first win in 15 months and his first-ever aboard the new Panigale V4 R.

Davies had gone winless since Aragon’s WorldSBK in 2018, and since the transition to the Panigale V4 R in 2019, he’s seemingly struggled to deliver the performances he’s become known for.

The British ace rode strongly all weekend long in America, pulling through with a 2-2-1 scorecard while advancing to seventh in the championship standings.

“This win really means a lot to me, because it’s been a long hard season so far,” Davies explained. “The last time I won was almost a year and a half ago and it gets to a point where you wonder whether you can still win or not. It’s just proof that if you keep plugging away and working hard then the results sooner or later will come and today was that day.

“Finally, we got it right, my team did an excellent job, in particular at the end of the FP1 session on Friday morning when we made a big change to the bike’s set-up. To be honest, I wasn’t sure I had the pace to win though, because Johnny’s pace in race one was strong and consistent while I chose the wrong tyre.

“Even so I wasn’t sure if this tyre would make the difference. I’m very happy and thrilled to get this result going into the summer break and we will all certainly celebrate tonight!”