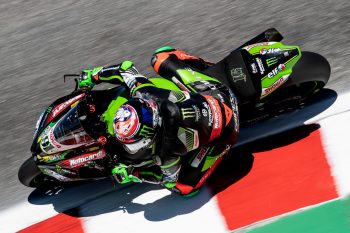 Kawasaki Racing Team’s Leon Haslam has revealed he battled pain in his wrist during Sunday’s pair of races at the ninth round of the 2019 Motul FIM Superbike World Championship (WorldSBK) in America, which came as a result of crashing during race one on Saturday.

Despite the injury, Haslam pushed on for a duo of strong performances in the Superpole race and race two, notching up a 5-6 scorecard, granting the British ace a haul of solid points while allowing him to hang onto fifth in the championship standings.

“I felt we had good pace today and we were there for that podium pace,” said Haslam. “I could catch Tom Sykes and Alex quite comfortably but in the end I just struggled with myself, not the bike. Especially braking into left hand corners – and there are a fair few of them here.

“I was disappointed with the crash yesterday and I have suffered all day today with my wrist and the pain transferred into my shoulder because I was not riding as freely. I can’t be too unhappy as it was my mistake when we crashed in Race One, but we have had a fifth and sixth today and were not far off the podium pace.”