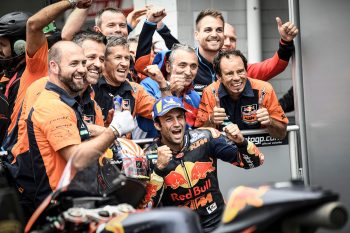 The Frenchman will start from third aboard the RC16 at today’s Czech Republic grand prix after advancing through Q1 and then shining in mixed conditions experienced throughout Q2.

“This feels pretty good because I have been going through a tough time,” Zarco said. “I’m still struggling, but the wet makes a reset for everyone. In the afternoon I found a good way and great confidence – I could feel the bike and the tyres. The strategy to go with slick tyres at the end was complicated and didn’t feel it.

“Rain tyres were a bit too hard for pole position, but I had good lap from earlier in the session. Anyway, this brings a good feeling for the team because I needed this and it shows I still have this fighting spirit that is necessary for this level.”

It was a stellar afternoon for the factory KTM operation, with Spaniard Pol Espargaro also making his way through Q1 to eventually qualify fifth on the grid. It equals his personal best qualifying result on the RC16, also starting fifth at Circuit of the Americas earlier this year.