Australia's Miller charges to sixth on the MotoGP timehseets. 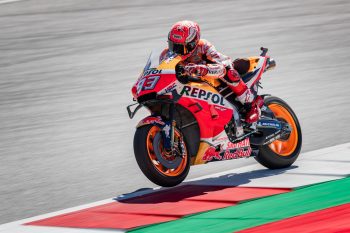 Marc Marquez (Repsol Honda Team) ended day one of the Austrian grand prix in P1 overall, but the reigning champion was run close.

Maverick Vinales (Monster Energy Yamaha MotoGP) got within just 0.066s of the number 93, with FP1’s fastest man, Andrea Dovizioso (Ducati Team), ending the day third overall. The Italian failed to improve his lap-time due to a late tip off, but his FP1 fastest keeps him in P3 at the venue where he won in 2017.

Marquez came out the blocks all guns blazing at the start of FP2 as he sported a soft rear tyre, and immediately the number 93 was able to better his time from the morning session and went to the top of the combined standings, pushing FP1 pacesetter Dovizioso down to P2.

Danilo Petrucci (Ducati Team) was also going well in the opening stages of FP2 too, after the Italian had a quiet FP1 and lingered down in P14 ahead of the afternoon’s running. As so often happens, however, it all came down to a frantic last 10 minutes.

The day was sunny, hot and, potentially, quite different to what may greet the grid on Saturday – meaning it was weapons free in a bid to take a provisional place in Q2. Dovizioso was the first who looked under threat as he uncharacteristically crashed at Turn 3 just after setting a red first sector. Would he keep the place or could his rivals leap up the timesheets?

One of the big improvers was Takaaki Nakagami, the LCR Honda Idemitsu rider having finished FP1 in ninth and finding time in the afternoon. First Nakagami went to P5 overall but on the next lap, the Honda man shot to P3 on the combined times, second in FP2. Viñales, third fastest in FP1, was also ramping his pace up and sure enough, the Yamaha man went second quickest – just 0.066s behind Marquez’ early session time.

Marquez, Vinales and Nakagami would remain the quickest of the session, with ‘DesmoDovi’ slotting into third overall.Behind Nakagami was a familiar face at the front: Fabio Quartararo (Petronas Yamaha SRT). The Frenchman was within a tenth of the Japanese rider ahead of him and finished the day in an impressive fifth overall, just ahead of a key rival – Jack Miller (Pramac Racing). The Australian flipped his formbook at the venue to complete the top six.

Miguel Oliveira (Red Bull KTM Tech 3), meanwhile, had a stunning Friday. The Portuguese rookie built on his 10th place in FP1 to move up to seventh on the combined standings, fastest KTM on the Austrian factory’s home turf – just 0.018s off Miller and 0.004 ahead of Petrucci by the end of play.

Cal Crutchlow (LCR Honda Castrol) was equally close in an incredibly tight gaggle of riders, 0.006s off Oliveira, and he moved up into ninth overall on his last flying lap despite finishing outside the top 10 in FP1.

The man who completed those who’ll be heading through to Q2 should the rain come down was Pol Espargaro (Red Bull KTM Factory Racing), who made it two KTMs in the top ten on home turf.

And the Austrian factory achieved that at the expense of some key contenders: Valentino Rossi (Monster Energy Yamaha MotoGP) was P11 by mere thousandths and will be hoping for a dry FP3 on Saturday to improve his time, and Alex Rins (Team Suzuki Ecstar) was just behind the ‘Doctor’ looking for the same. Will the two be heading head to head in Q1?

Sky Racing Team VR46’s Celestino Vietti laid down the marker on Friday in Moto3, ending the day fastest with his final lap in FP2 – but not by much. The Italian was only 0.031s ahead of Petronas Sprinta Racing’s John McPhee, with the Scot, in turn, only 0.022s clear of SIC58 Squadra Corse’s Tatsuki Suzuki. 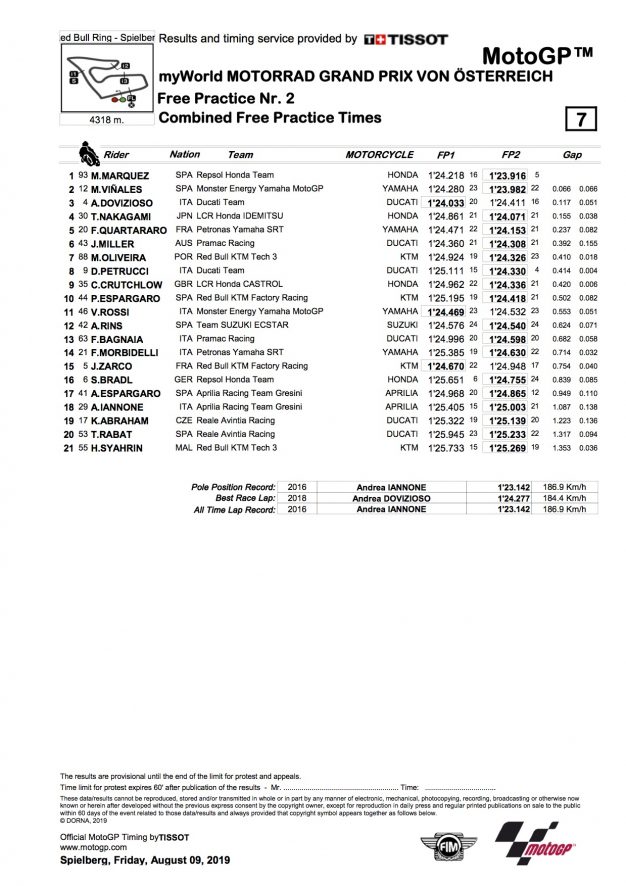 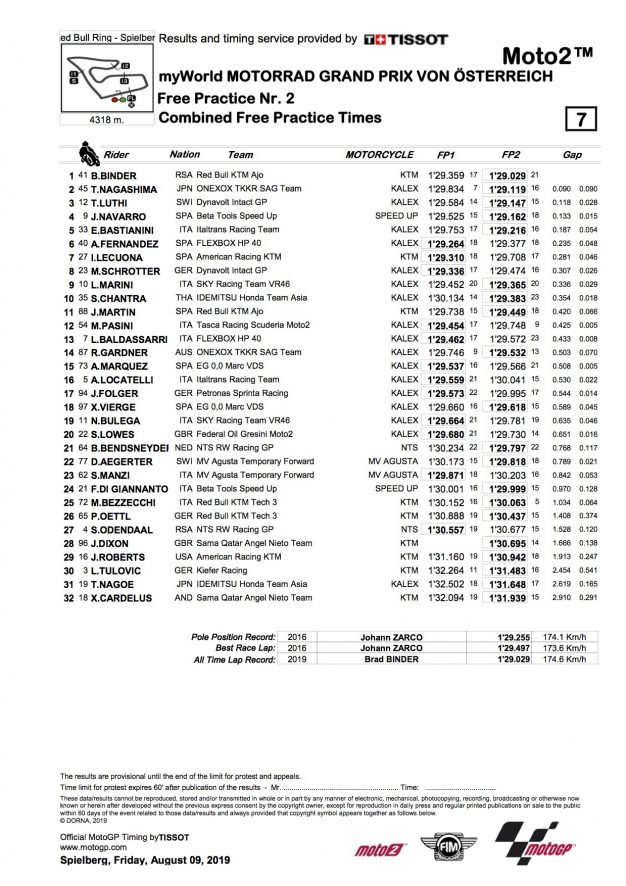 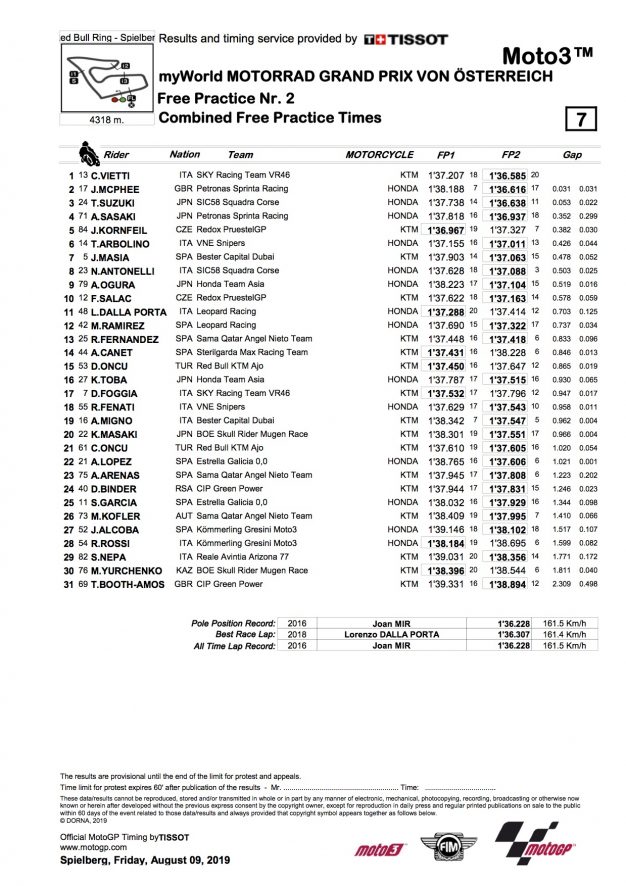 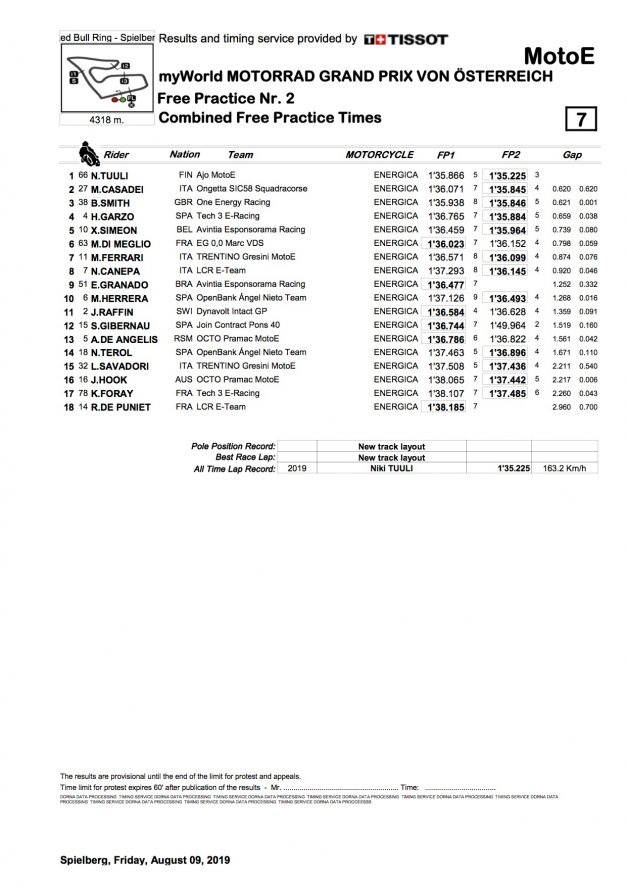