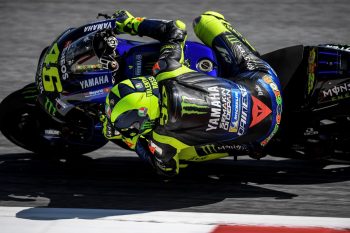 Multi-time world champion Valentino Rossi is optimistic a strong performance is on the cards this weekend at the British grand prix, the Italian fan-favourite rating the Silverstone venue as one of his top five tracks on the calendar.

Silverstone was cancelled last year due to adverse weather conditions, however Rossi’s last result at the circuit in 2017 saw him rise to third, finishing just a fraction behind winner Andrea Dovizioso (Ducati Team).

“I love Silverstone, it‘s in my top fice of favourite tracks,” Rossi explained. “I like it a lot because it‘s an old-style track. It‘s very long, riding a lap is like taking a trip from one place to another, and it‘s technical – it has everything. When you‘re fast, it‘s a great pleasure to ride there.

“I have good memories of this circuit, but everything depends on the weather. Riding at Silverstone in difficult weather is scary because you‘re going so fast, so we‘re hoping for similar weather to what we had in 2017, when we had a good weekend. To be fast here you need a good feeling and stability.

“Even in the hairpins you have fast points and there are also a lot of long turns, so it‘s a track where usually Yamaha is fast. We hope for good weather because last year was a nightmare, so we hope that this year it will be a good weekend, also for the fans.”