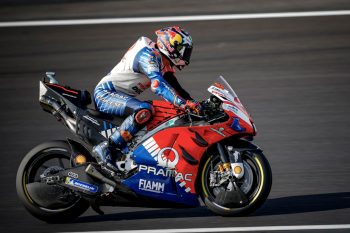 Australian Jack Miller has explained the holeshot device drama he battled in the opening turns at the British grand prix, which saw the aid fail to disengage and lead to a number of ‘scary’ moments.

The Pramac Racing ace, who recently signed a contract extension to remain with the squad for 2020, lost multiple positions in the initial stages of the 20-lap encounter after starting from the front row, while he was later forced to manage a lack of grip on the rear wheel.

He pushed through to salvage a P8 result despite earlier battling for sixth, promoting him to the top of the Independent Team standings.

“My start was good but I couldn’t get my holeshot device back up,” said Miller. “So I was going all the way through turn one, two and three like a chopper. I was trying my best to get it to pop up and people were going around me left, right and centre. It wasn’t ideal but anyway, I struggled with grip from the start until the end.

“Generally at places like this I don’t use it – I thought we had enough transfer on the base but I had doubts about it. It depends [on the track] – at Phillip Island we can’t use it – If we’re a bit further behind here then we could use it. Dovi was able to get transfer no problem. Being so close to the corner, I barely had to brake. I was trying to grab extra brake.

“Being at the front of the group you don’t want to be grabbing too much. You’re checking 20 odd bikes behind you. It wasn’t my best start, that’s for sure. It was quite scary heading down towards turn three on an orange county chopped trying to get it to transfer over, grabbing big handfuls of brakes all the time.

“I had to do a bit of a ‘stoppie’ and trying to get it to pop up in a strange spot. I managed to get it to come up in the end – but it was one of those things.”

Miller is now ranked seventh in the MotoGP World Championship as the series now heads to Misano in Italy on 13-15 September.