ASBK to feature at one-off Supercars event in 2020

Superbike category to join auto racing program at still to be announced venue. 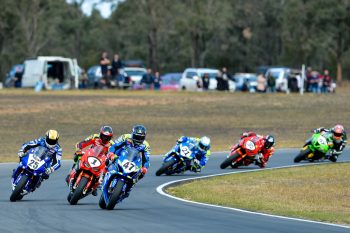 It’s been revealed the Motul Pirelli Australian Superbike Championship (ASBK) will feature at a one-off round of the country’s premier auto racing series, Virgin Australia Supercars Championship (VASC), in the 2020 season.

The ASBK, which has been integrated into the VASC program previously, is still to announce the venue that will host the Kawasaki Superbike category next year.

“At the moment it’s baby steps in 2020 with just the one event,” explained Motorcycling Australia CEO Peter Doyle. “However, we certainly hope there are further opportunities to grow the ASBK and VASC partnership in the future.

“To have the two main premier categories on both two and four wheels racing at same venue again will be a great spectacle for all motorsport race fans. It really is an exciting time for the Australian Superbike Championship branding, that’s for sure.

“We know many of the Supercars drivers and teams are big fans of motorcycle racing and ASBK, so no doubt we will see them hanging out in pitlane to watch all the Superbike action.

Supercars COO Shane Howard added: “It is fantastic to have the Superbikes and ASBK back on our support card. They will be spectacular next year, and we look forward to growing our partnership into more events in the future.

“We look forward to growing our partnership into more events in the future with ASBK. For the time being, we can’t wait to watch some awesome two-wheel action and I’m sure our Supercars fans can’t wait either.”

Supercars released its 2020 calendar today with a list of major changes for the new year, including the addition of ASBK. The next stop of the current Australian Superbike series is scheduled for 6-8 September at Winton in Victoria.