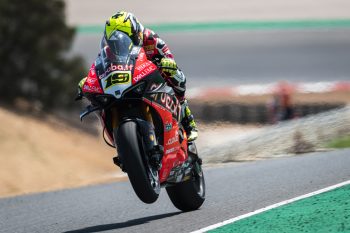 A thrilling race two at Portimao fired the championship race back into life as Bautista overcame a poor start and a shoulder injury to triumph over Rea in a final lap run to the line. With plenty of drama from lights out and slipstreaming battles soon following, groups were scattered right through the field and provided a packed Portimao plenty of action.

Off the line and it was a blissful start for Rea from pole position but a disaster for Bautista, who plunged down the order to sixth place after lap one. Razgatlioglu was a fast starter and up to second, ahead of Haslam. Lowes was fourth and teammate Michael van der Mark (Pata Yamaha) was fifth, ahead of Bautista – but the Spaniard was right in the hunt as the group remainder close together.

Bautista soon began his comeback, first picking off van der Mark down the front straight at the end of lap one, before picking off Alex Lowes two laps later. The comeback continued and he hit third a lap later, before slicing ahead of Jonathan Rea to momentarily lead with 15 to go. But Razgatlioglu had other ideas, as the Turkish rider hit the front of the field.

With Razgatlioglu and Bautista leading, Rea had to try and find a way to react to the change of the guard at the front. Haslam was still in the mix with the two Pata Yamahas just sat behind, with the front six covered by just one second. A lap later, the horsepower of the Ducati propelled Alvaro Bautista back into the lead of a race for the first time since Misano, and the Spaniard soon began to put the hammer down.

Rea fought back on his fellow Kawasaki rider Razgatlioglu, but whilst he closed up on Bautista, he wasn’t able to make a move on the Spaniard. Further back and at half race distance, isolation of the leading six began to set in. Lowes made his move on Leon Haslam with 10 to go, after the ‘Pocket Rocket’ lost an entire second to his fellow Brit.

One rider to watch was Loris Baz (Ten Kate Racing – Yamaha) as he closed on the battle for fourth. Behind them, Tom Sykes (BMW Motorrad WorldSBK Team) and Jordi Torres (Team Pedercini Racing) were squabbling over ninth, just behind Marco Melandri (GRT Yamaha WorldSBK).

With the gap between Bautista and Rea extending to over a second, and Razgatlioglu sat in a safe third place – barring acts of God – the big battle on track was for fourth, with Alex Lowes and Leon Haslam swapping places with five laps to go. At turn three, Michael van der Mark parked his Yamaha in the way of Haslam, bringing Loris Baz right into play. Haslam fought back however, and a lap later at Turn 5 he was back into fifth place and chasing after Alex Lowes.

In the closing laps, the race began to come alive at the front, with Rea lapping quicker than Bautista and the gap coming down to less than a second, although with two laps left to run, it was beginning to look a little bit late for Rea to return to the front. However, his teammate – Haslam was climbing all over Lowes in the battle for fourth.

On the final lap, the gap at the front closed dramatically and Rea was right with the Spaniard, but on the run to the line, Ducati power prevailed over Rea’s resilience. Bautista was back on top and took the verdict, winning for the first time at Portimao. Rea was second and Razgatlioglu took a 10th career podium in third. Lowes held-off Leon Haslam but Loris Baz made it to sixth and beat Michael van der Mark. Lowes therefore returns to the third overall.

The gap comes down to 91 points in the championship race, but the battle for third is well and truly alive, with 45 points covering third to seventh. 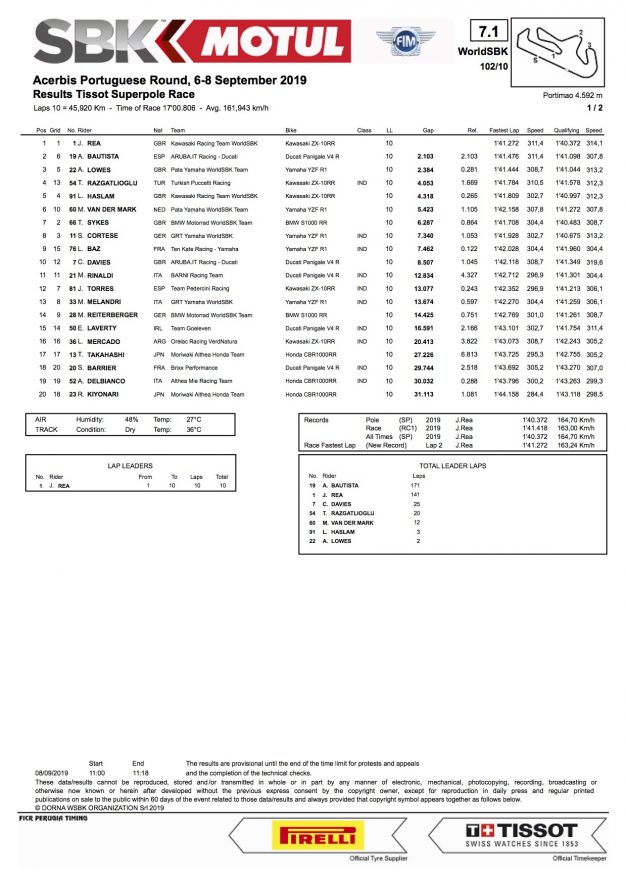 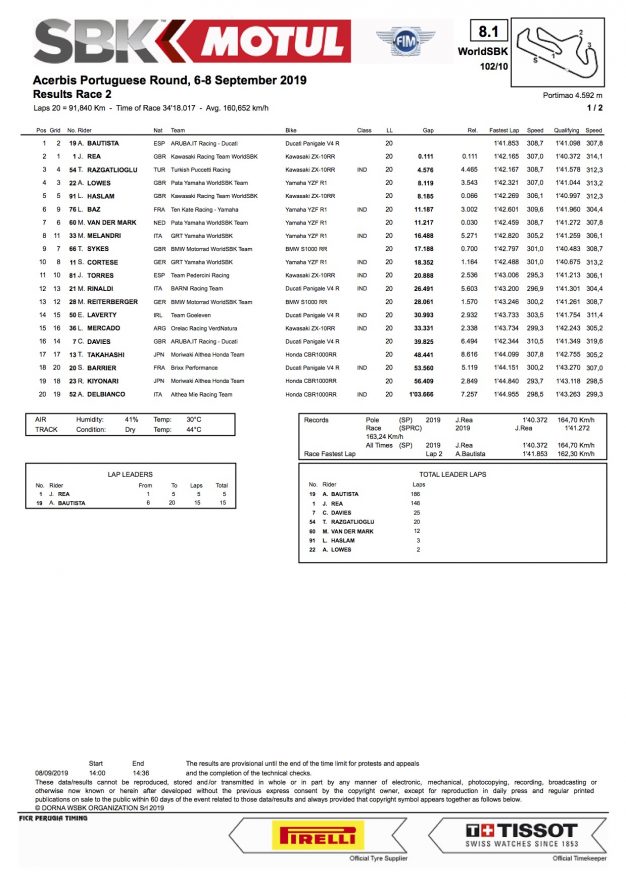 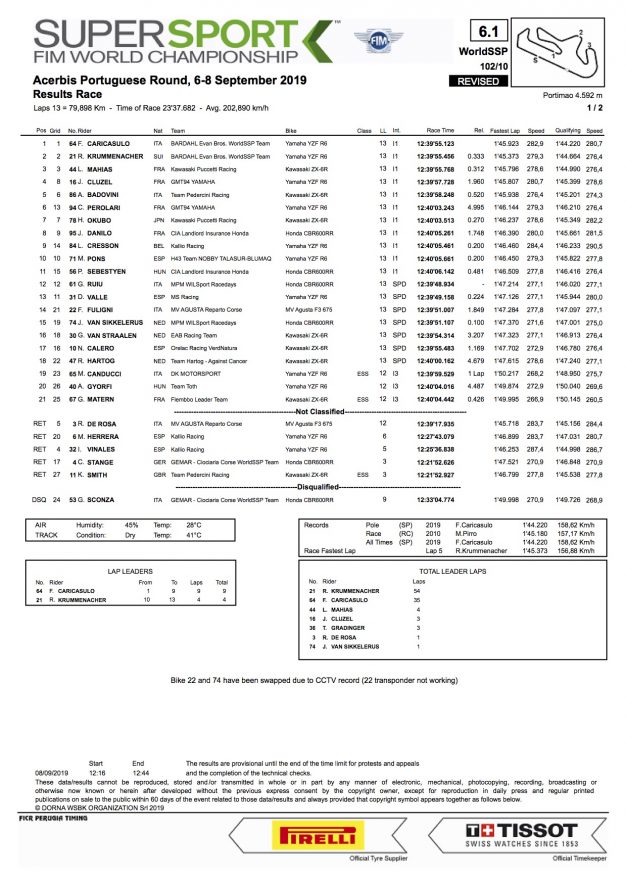 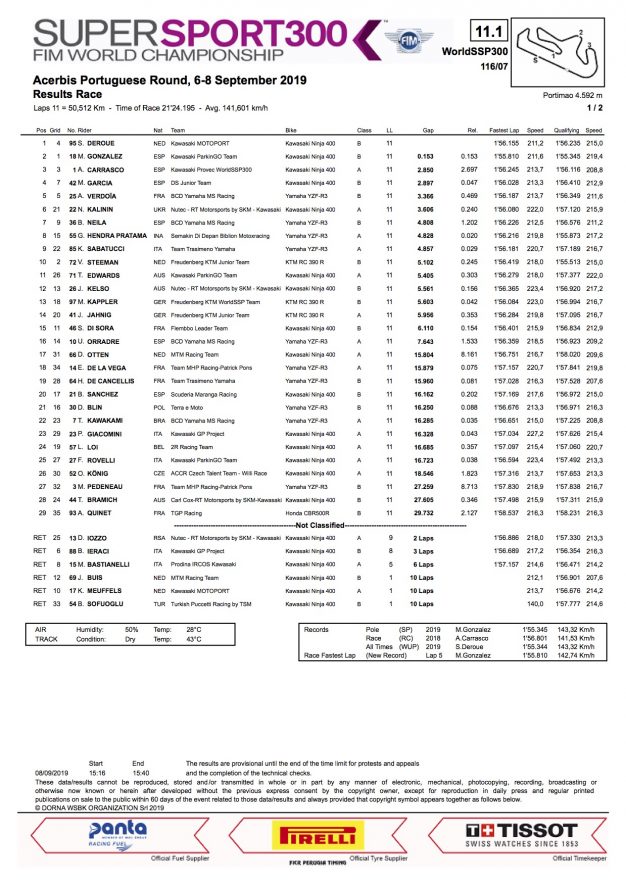