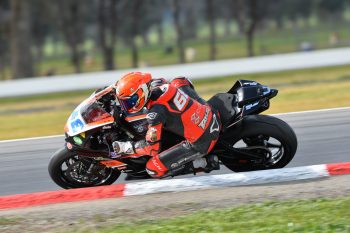 On a cold, and at times damp, Winton Motor Raceway near Benalla, Victoria, the Cube Racing Team secured strong results for both Oli Bayliss and Avalon Biddle, as the pair contested the fifth round of the Australian Superbike Championship (ASBK), despite how things may appear based on race results alone.

Team owner, Ben Henry: “I think this is the happiest I’ve been with the entire Cube team all year to be honest. Despite having a bike DNF, you couldn’t get the smile off my face when Oli got the fastest lap (1:23.602) of race one and was actually racing with Tommy (Toparis). Race two and not only was Oli racing Tom, he led the race in the opening stages. There has been a bit of a gap between racing for third, fourth or fifth and racing with first in SuperSport this season, so it really feels like a new level for Oli, and I’m sure this won’t be the last time we see him battle for the win. I was just as happy to see Avalon get a time in Qualifying that was on the pace too, she’s motivated to show that she can run at the front and I’m looking forward to getting to Phillip Island and seeing her in the mix.”

Oli Bayliss: “It was a mixed weekend for me with a crash in qualifying one, to setting the fastest lap time in race one and finally getting a chance to race with Tom (Toparis). The overall results don’t really show what what my weekend was like though. I found a step in the first race that I haven’t felt before, and even though the bike stopped, the entire team was pumped on what they saw. Glen and Johno worked hard all weekend, and in race two I battled with my mate Tom (Toparis) and Broc Pearson, leading for the first four laps, and challenging him through the race. It feels like a turning point to be honest.”

Avalon Biddle: “We turned a corner this weekend in more ways than one! It’s safe to say we’re moving past a poor weekend at Morgan Park and progressing forwards! There’s still some work to do to keep moving forward and get the podium finishes I believe are possible, but fourth overall is certainly a good place to start. We made some suspension changes to the bike throughout the weekend and really made a bit of break though at the end of the final Qualifying session on a dry track. With very limited track time I was slowly building confidence with the R6 to get closer to the expected race lap time. In both races, I was able to aggressive, make passes, and race with the guys around me rather than sitting behind. Phillip Island is up next and it can’t come quick enough.”